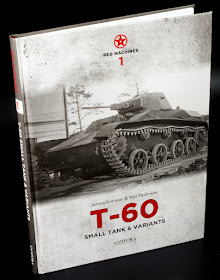 Canfora Publishing has a knack for turning out great books on modelling. They have launched a new series featuring the Russian tanks and AFV's featuring different vehicles in photos, profiles and blueprints. "T-60 Small Tank & Variants" is the title that Paul got to reading, and he thought he would share his findings in our "Read n' Reviewed" article today... 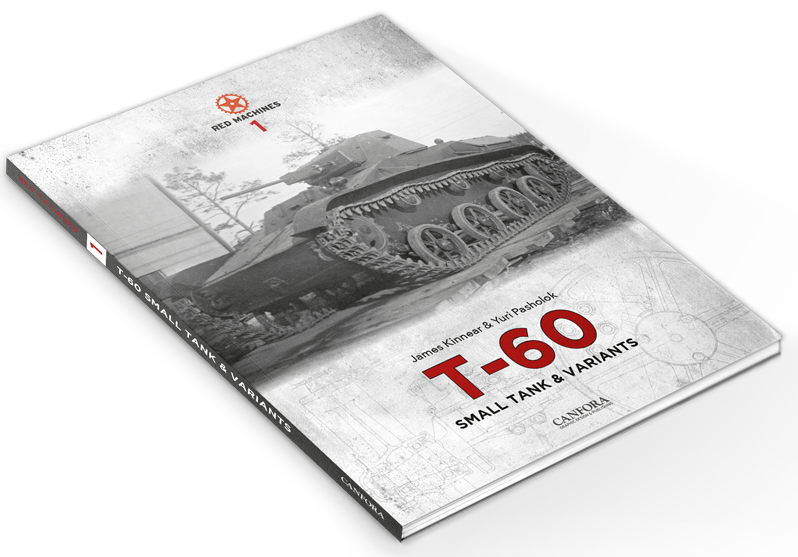 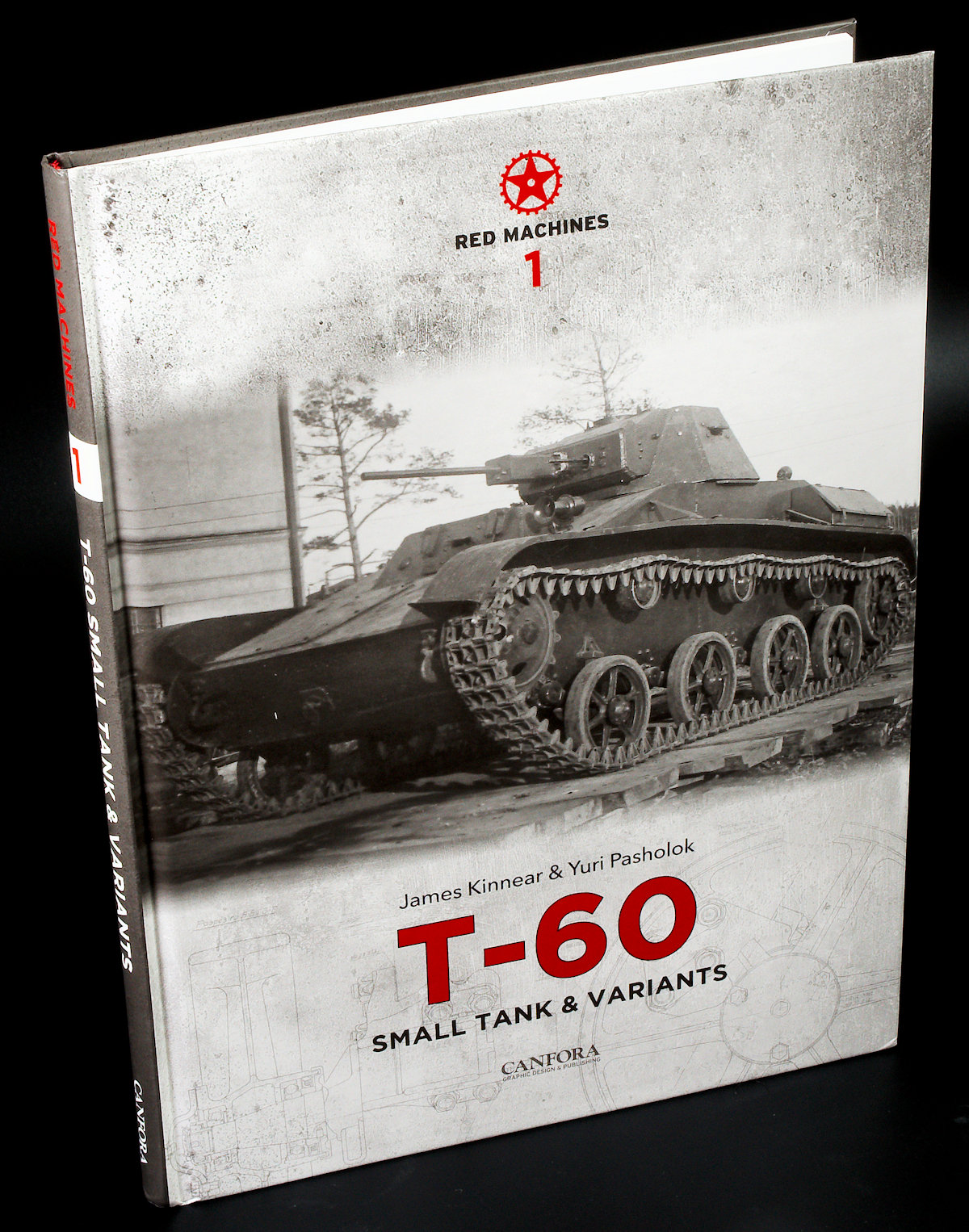 When reading about World War 2 from a Soviet point of view, it is quite easy to come to the conclusion that the T-34, KV series and Joseph Stalin tanks were the only tanks fielded by the Soviet Union during WW2. Any historian or WW2 enthusiast will be able to tell you that the T-34 was the most mass-produced tank by the Soviets in the war. So, what came second? KV? Stalin? It was actually the Su-76, so how about a third? To my complete surprise, the answer is apparently the T-60 which is the subject of this book by Canfora Publishing. 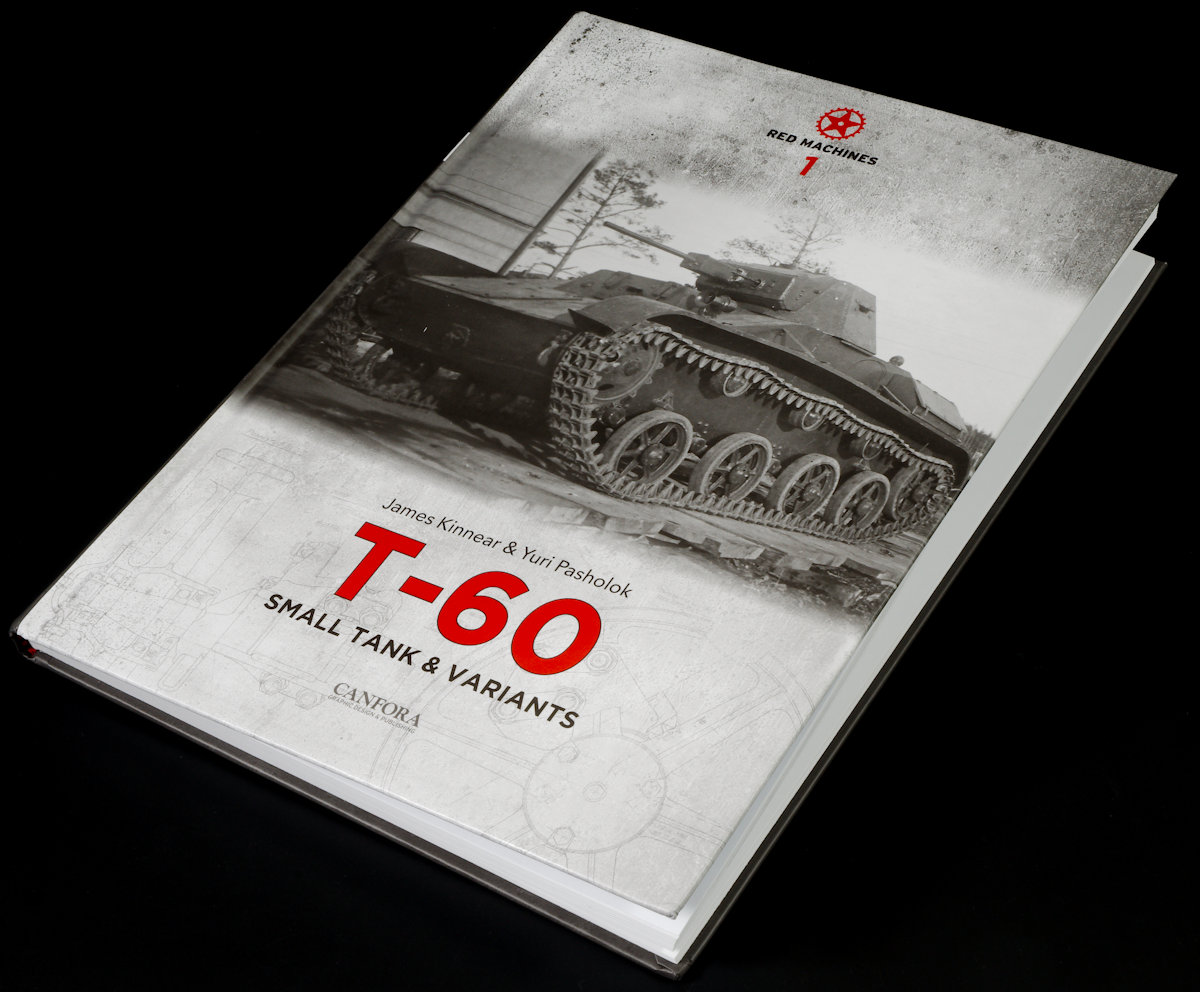 The book comes in an A4 hardcover format with a photo of a T-60 tank on the cover. This appears to be the first in a series of books called Red Machines, with this volume being about the T-60 and written by James Kinnear and Yuri Pasholok. The back has a picture of some T-60’s presumably on a Russian street, accompanied by some text about the tank, and the important role it played during the early parts of the German invasion with over 6000 tanks produced from 1941-1942. The book is in English and is printed on thick glossy paper. The book is spaced well and not too text heavy with lots of accompanying pictures and charts throughout. 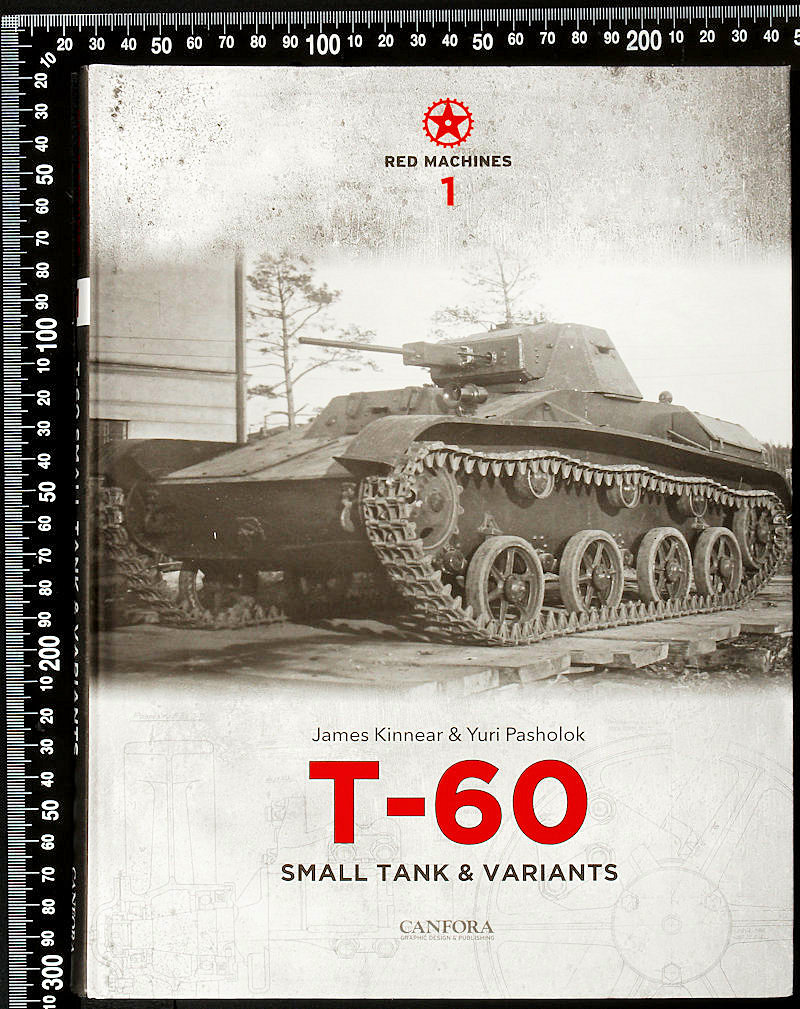 The contents page shows that the book is divided into eight main chapters, with an introduction on the next page. The introduction will sound very familiar if you have read the blurb on the back cover because the blurb is a brief summary of the introduction, which goes into a bit more depth on the development of the tank and how the tank is still quite obscure. It also makes a point of telling you that the bulk of the material in this book is derived from Russian archives, and in some cases only been declassified during the last decade so the information inside is original and authentic. It also explains how the T-60 often dubbed a light tank, is actually described as a small tank in Soviet service and plays a different role to that of a light tank. 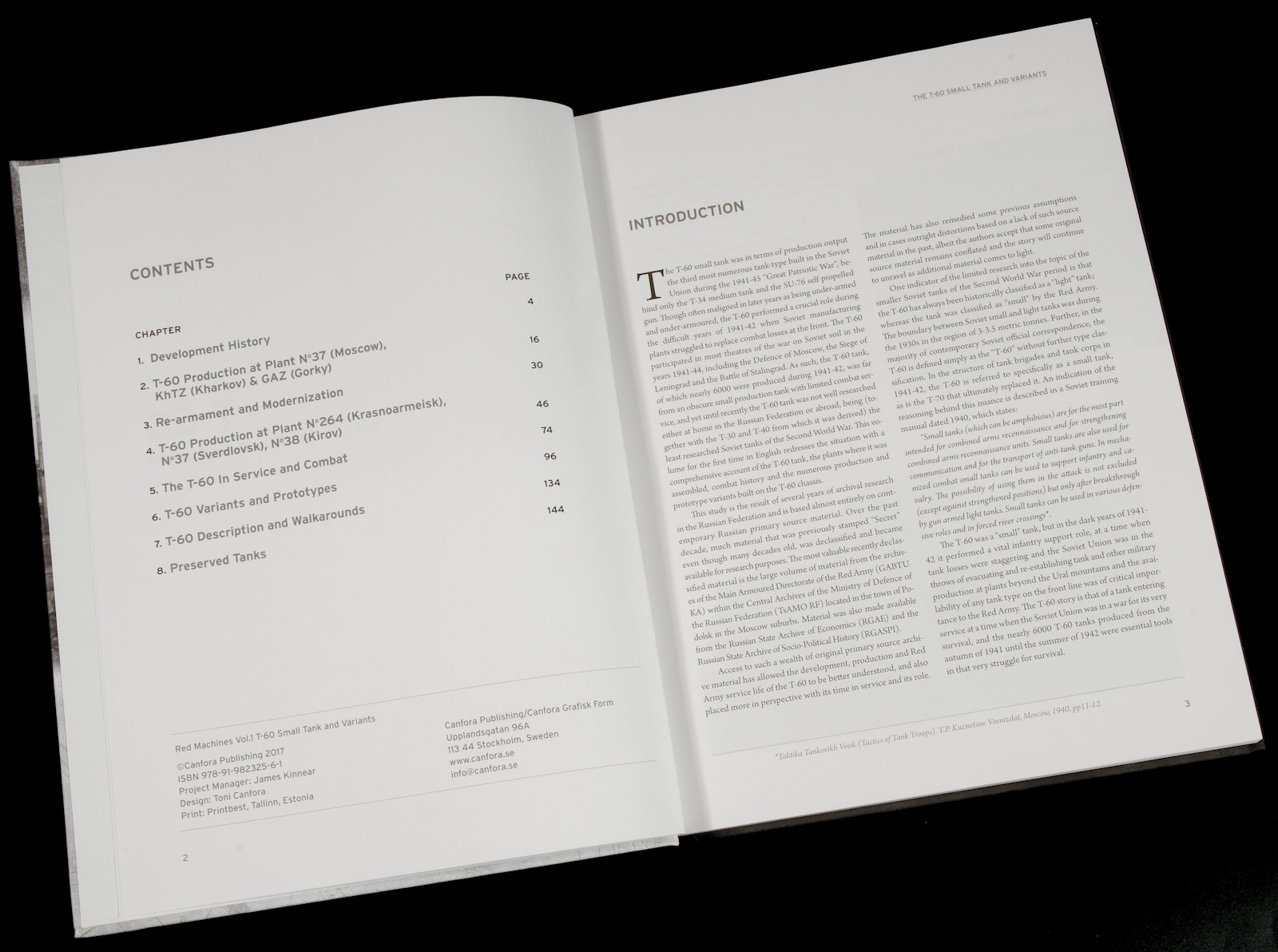 Chapter 1 is called the Development History and starts off with the state of Soviet light tank production in the lead up to the German invasion. The T-50 was initially selected to be built in large numbers to replace the T-26 and T-40’s in service but being a much more complex design led to difficulties with production. These difficulties would be magnified by the German invasion due to the sudden increase in demand for tanks, which led to an extremely brave letter to Stalin himself, suggesting that plant initiative “060” to be built instead. Being based on the T-40, the T-60 would be able to be produced in much larger numbers than the T-50 because the factories would not need to be re-tooled as much. This initiative would later be named the T-60 and then moves onto the preparations the factories had to make, engine and armament options, and also the designer of the T-60. 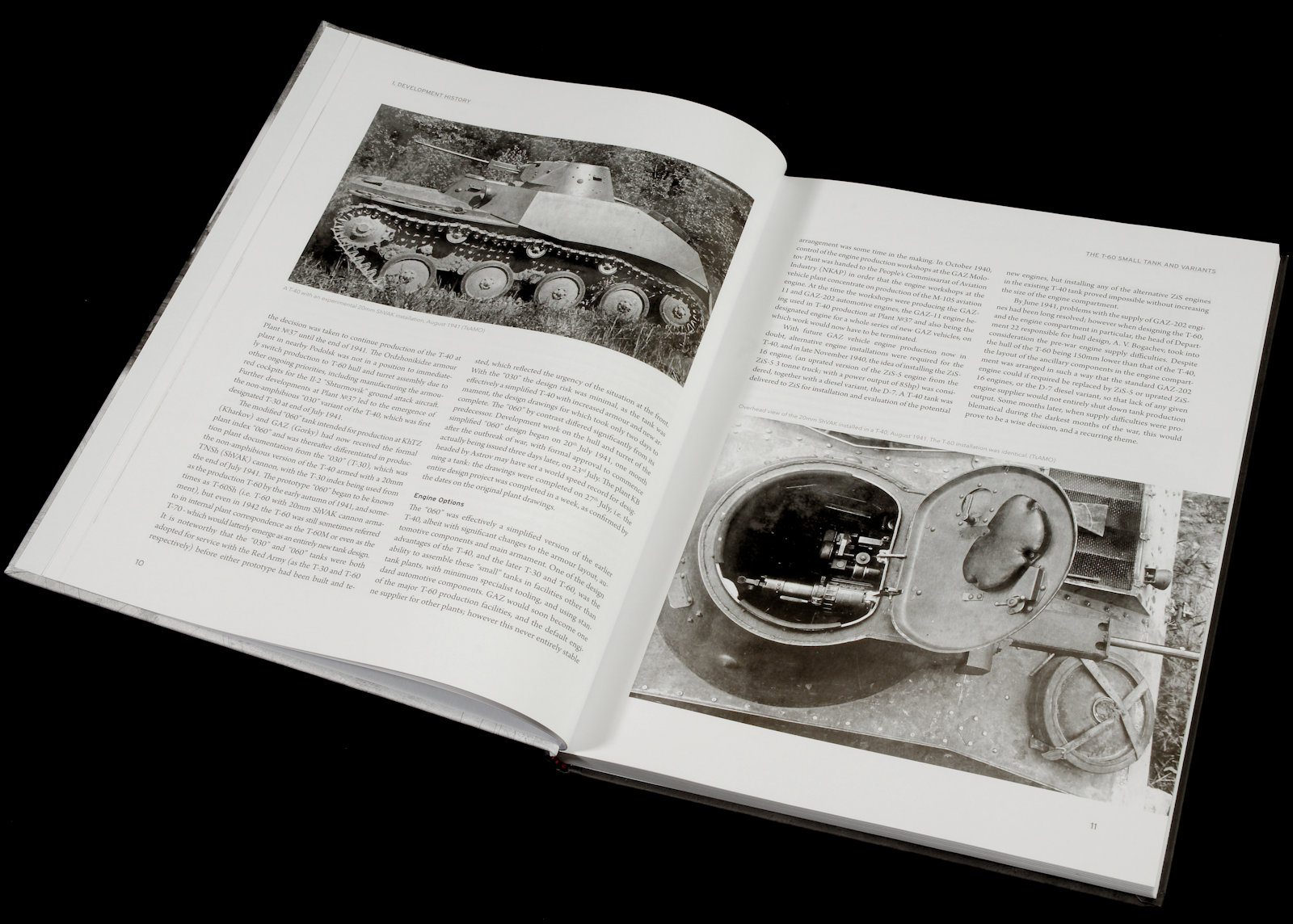 Chapter 2 covers T-60 Production at Plant No37 (Moscow), KhTZ (Kharkov) & GAZ (Gorky). While that description sounds like it makes for some very dry reading, it does put into perspective what the Soviet Union had to go through during The Great Patriotic War, and the difficulties they faced to achieve what they did during the war. The prototype vehicles are discussed and the subsequent changes that had to be made before the design could be put to mass production, and then onto the factories themselves with some wartime letters thrown in which give the text that human touch. 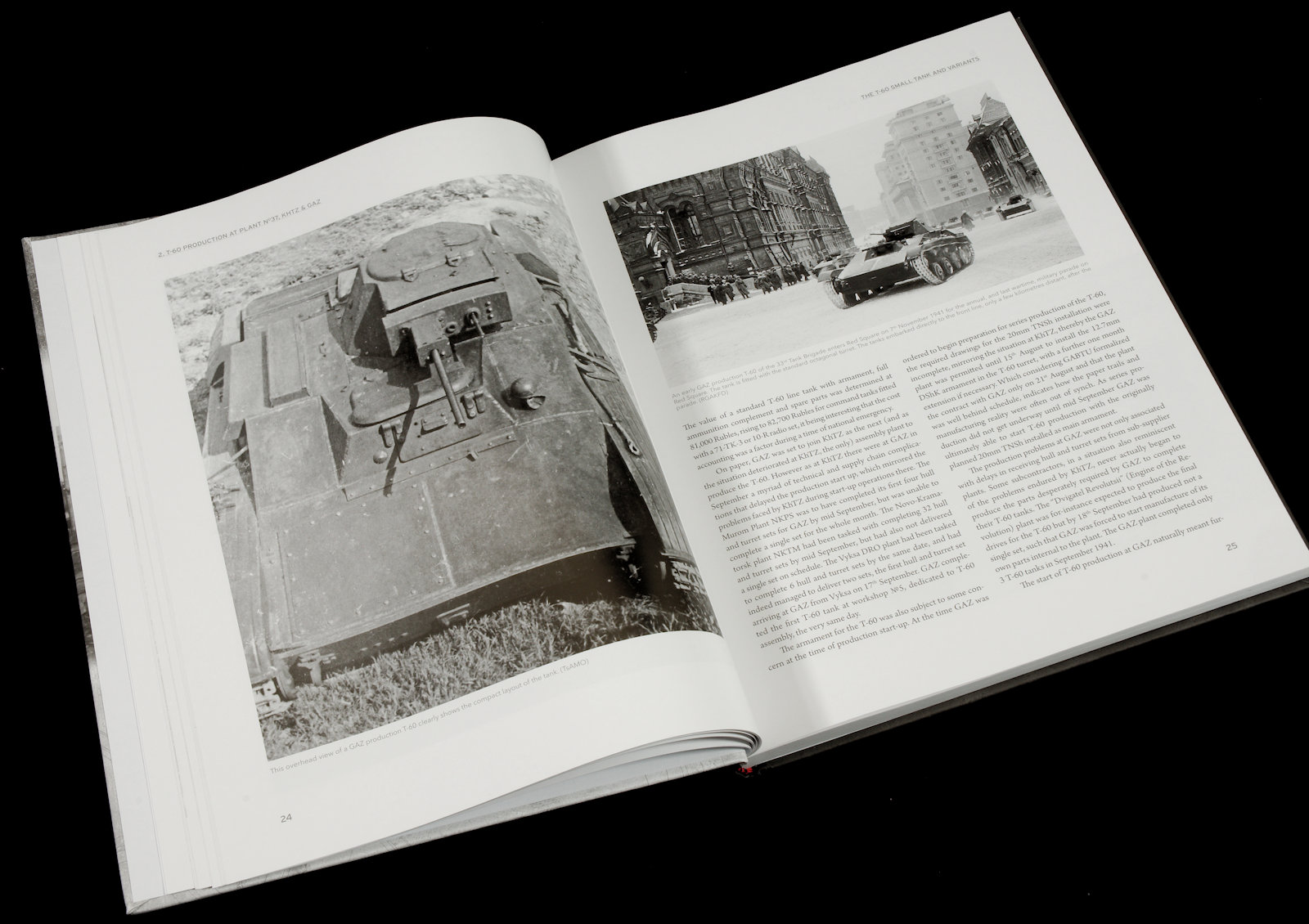 Chapter 3 is about Re-Armament and Modernization and talks about the changes to the design after entering service, and how the design was improved as a result of combat experiences. Letters and design notes really do add to the authenticity of the material, and talks about why they decided on the changes they made, and also discussing the various prototypes of the vehicles with different armour and armament. 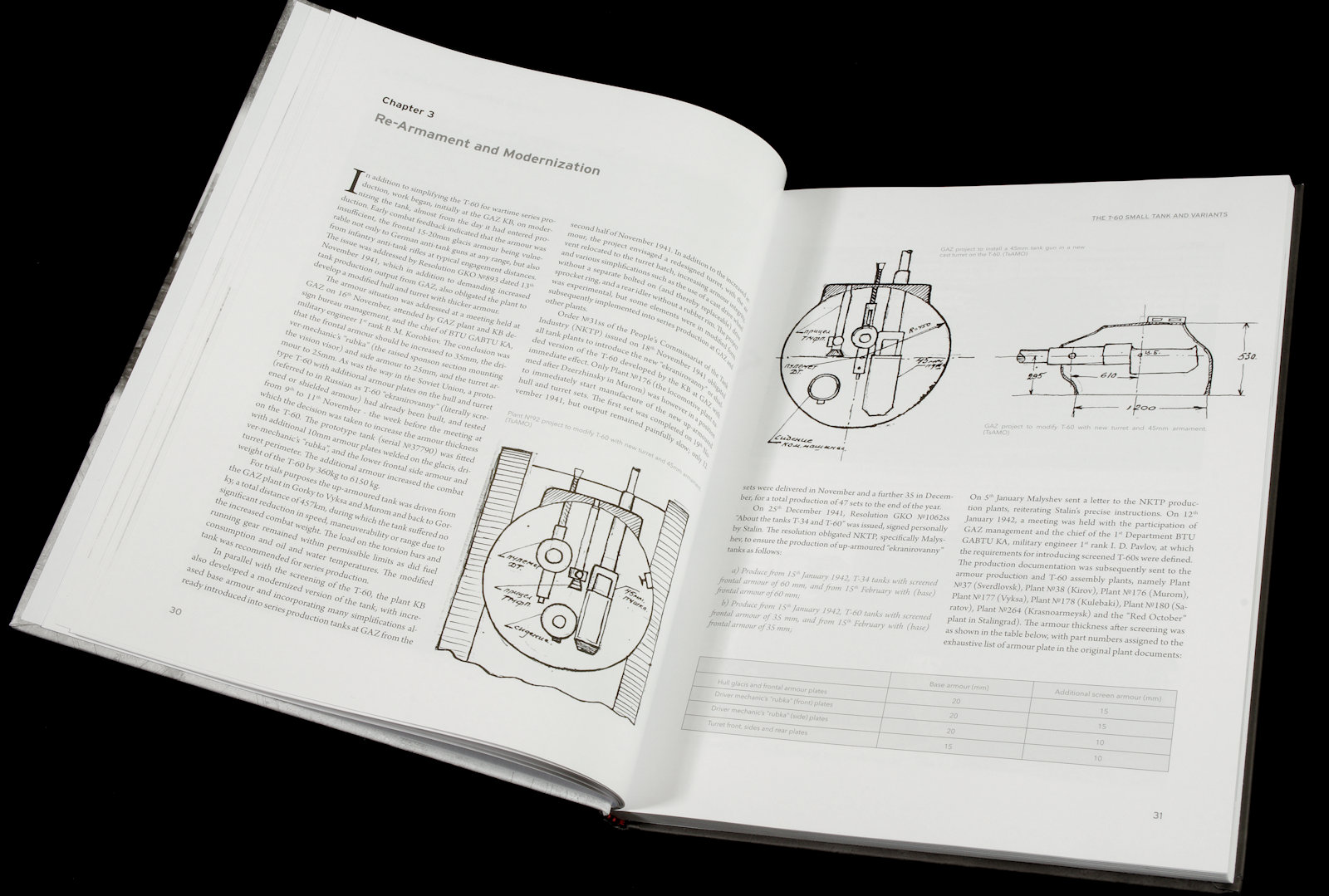 Chapter 4 covers T-60 Production at Plant No264 (Krasnoarmeisk), No37 (Sverdlosk), No38 (Kirov) and unsurprisingly very similar to chapter 3 which is not a bad thing because each of the factories had their own human stories and faced different challenges, so as I said earlier, really does put into perspective what challenges the Soviets had to overcome, and that winning the war wasn’t just dependant on the troops at the front. 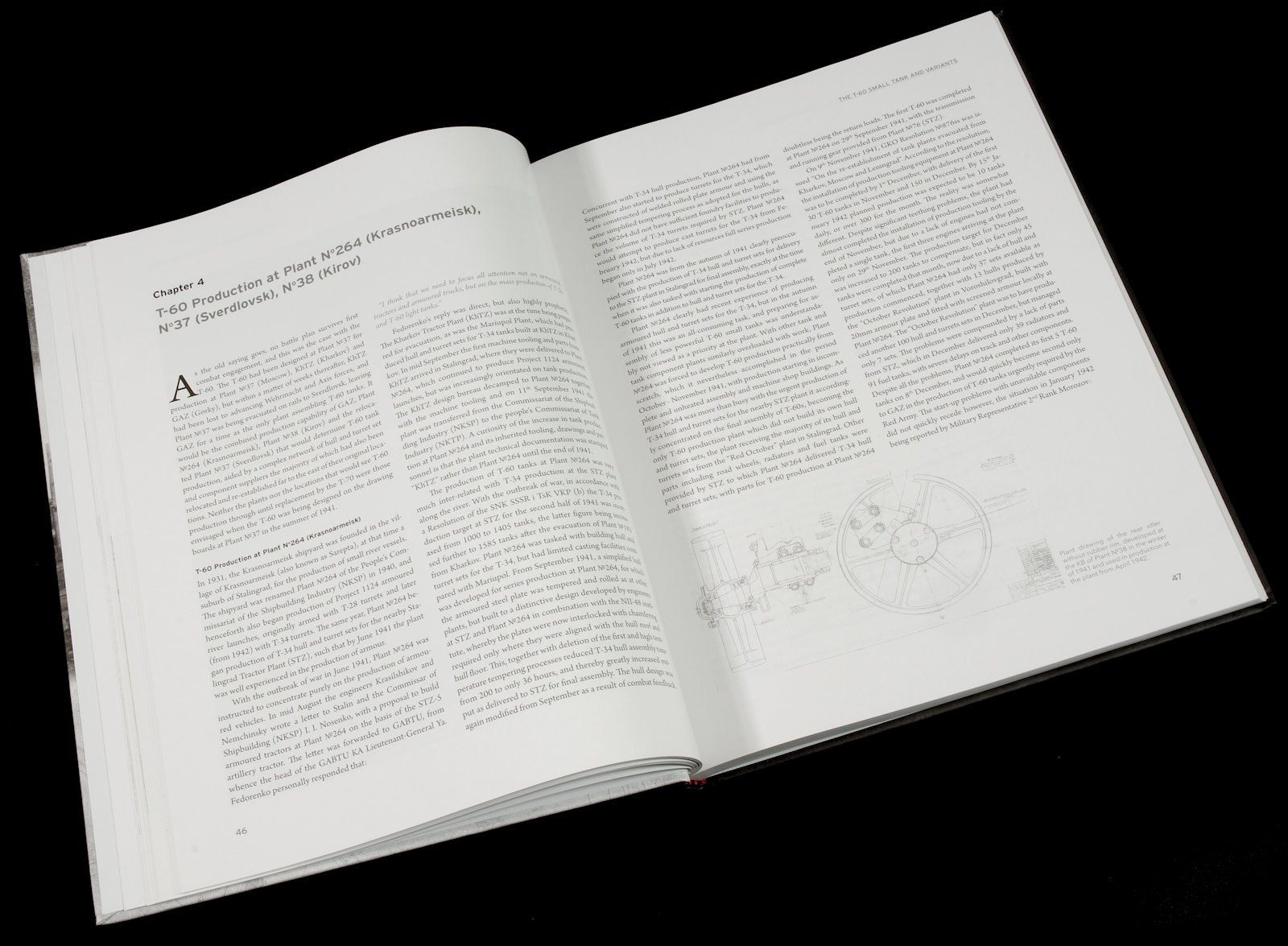 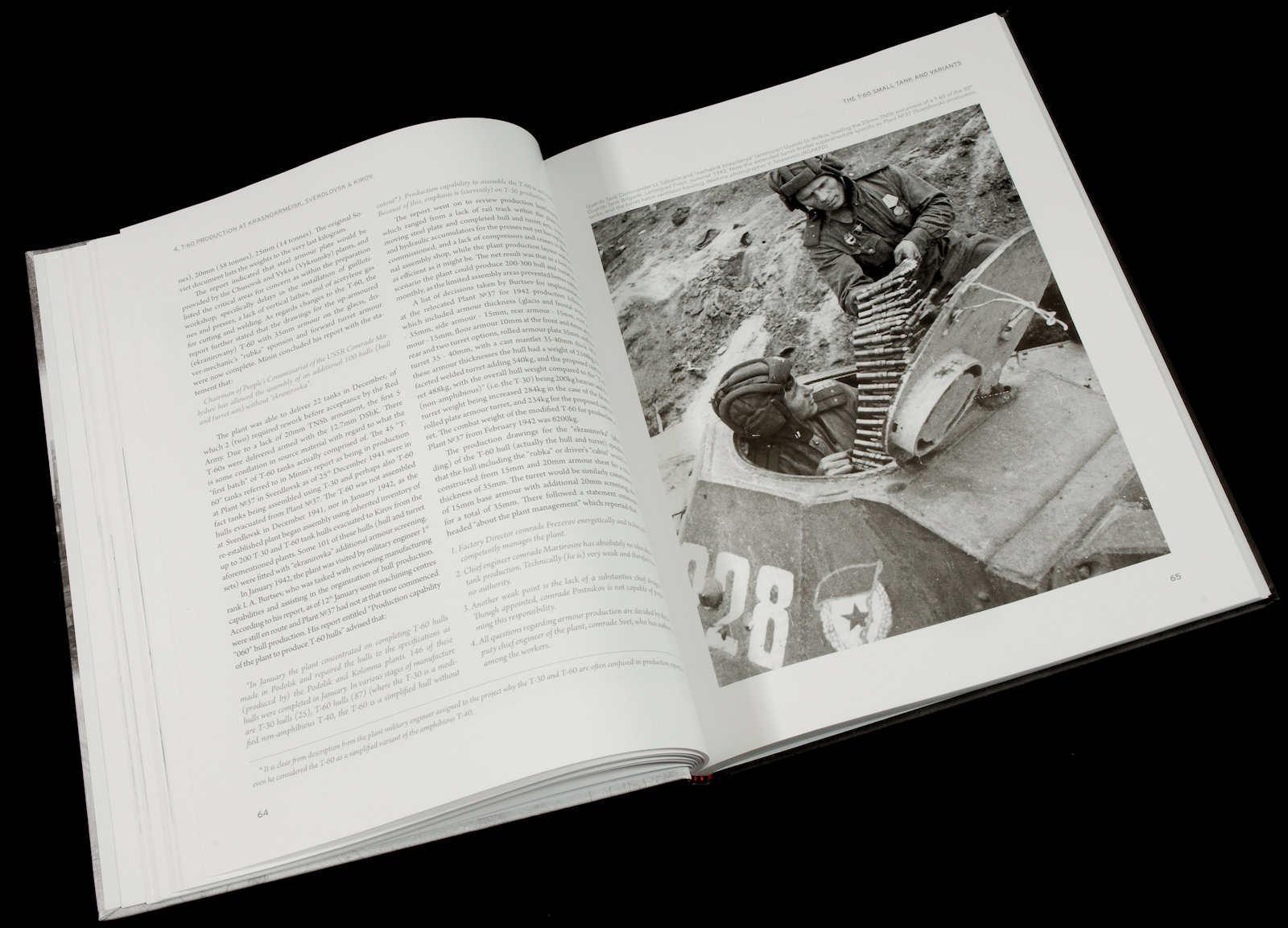 Chapter 5 moves onto the T-60 in Service and Combat. I always find it funny that light tanks are usually described as being under protected and under gunned, but isn’t that what makes the tank a light tank in the first place? The chapter then tells a story about Lieutenant Dmitry Ivanovich Osatyuk, and his driver/mechanic Sergeant Ivan Mikhailovich Makarenkov and their participation during Operation Iskra to relieve the Siege of Leningrad. While it is not a blow by blow account of the events of the day, it is a summary that would well and truly be worthy of a Hollywood tank battle scene with Osatyuk’s company of T-60’s finding itself outflanked by three Tiger tanks with their accompanying troops. Osatyuk and Makarenkov would both earn the Hero of the Soviet Union award for their actions in Operation Iskra. Some pictures of the T-60 taken by both sides follows the story, and the size of the tank becomes especially apparent when you see people beside the tank. 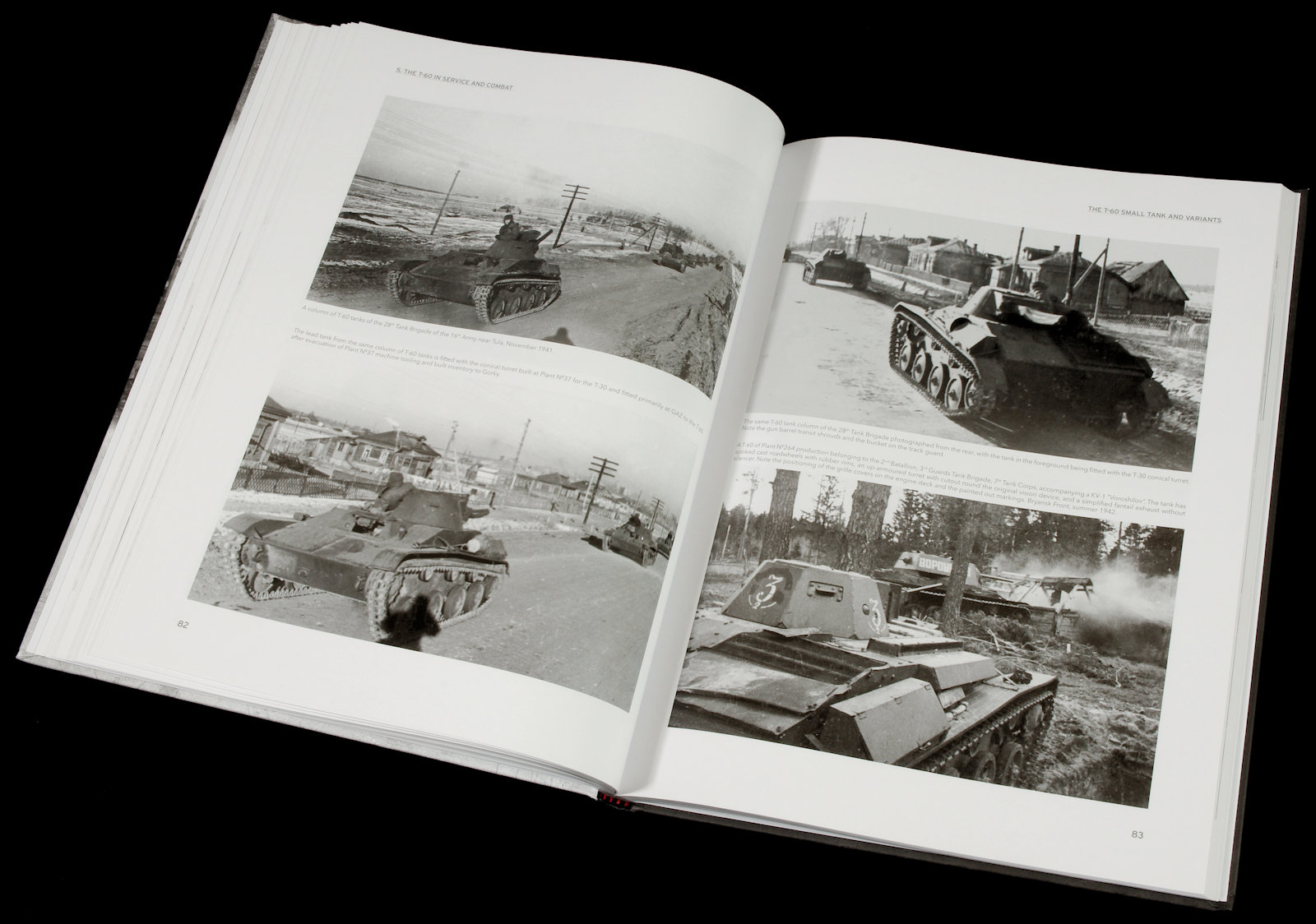 Chapter 6 moves onto T-60 Variants and Prototypes, two vehicles in particular caught my attention. The first one is the BM-8-24, which consists of the T-60 chassis mounting the 82mm Katyusha rocket launcher system, perfect timing for the Miniart being released later this year. The other vehicle is the KT Flying Tank, the name is self-explanatory and it is an interesting read about the Soviet development, but ultimately unsuccessful attempt to develop a tank glider. 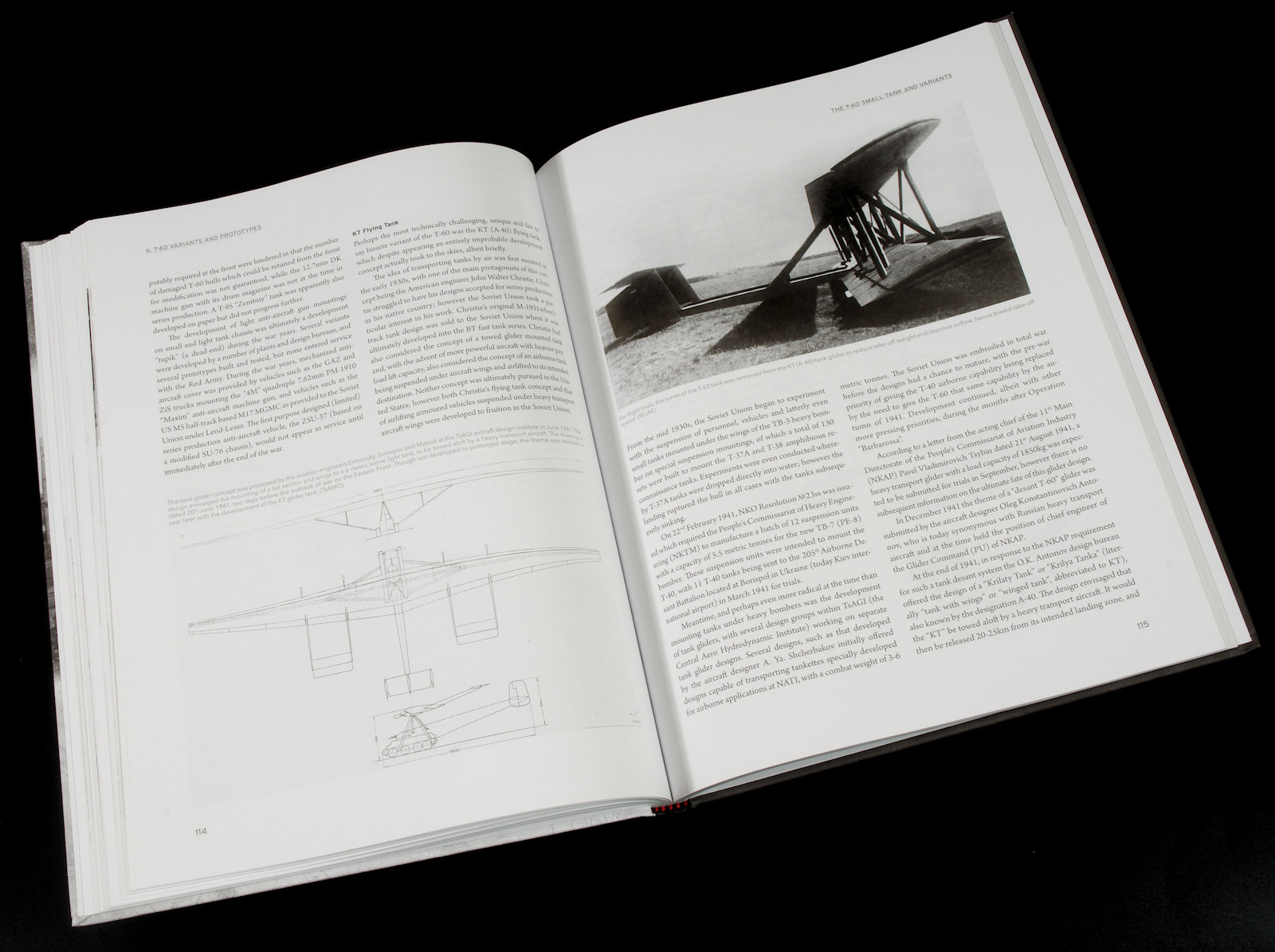 Chapter 7 is called T-60 Description and Walkarounds and is an excellent combination of text describing the particular features of the T-60, and the colour photos of restored T-60’s on display, as well as some good close up shots of the various details around the tank. Excellent material for the modeller looking for that bit of detail a kit may or may not have. 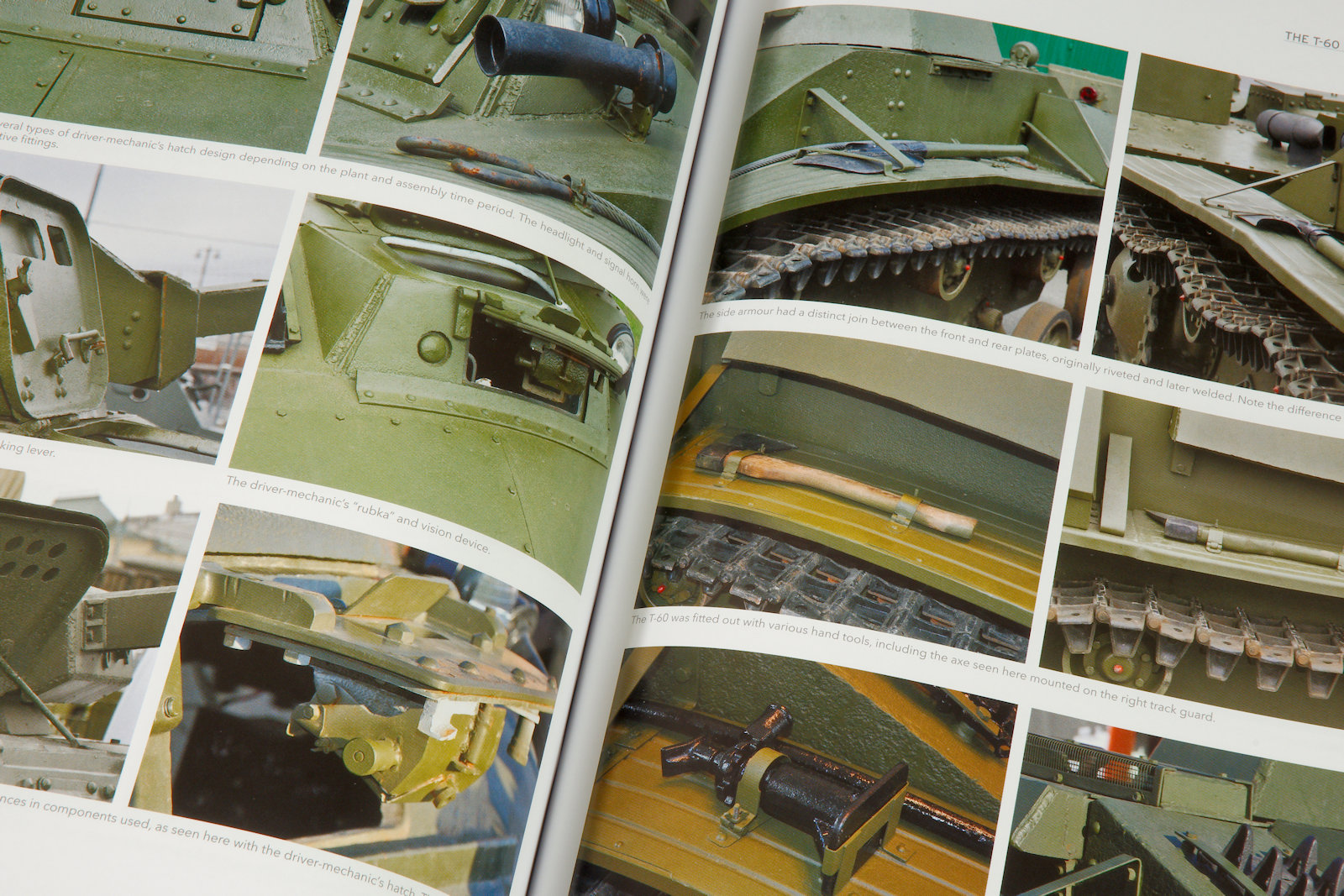 Chapter 8 covers T-60 Preserved Tanks and discusses various T-60’s on display, both previously in the Soviet Union, and modern Russia, and briefly covers where the tanks came from and their restoration, as well as pictures of the tanks themselves. There is also an accompanying table of T-60’s on display around the world although there are only two examples outside of Russia, one in Finland, and the other surprisingly, at the Australian Army and Artillery Museum in Cairns. Field trip? You know who you are.

While there is no mention, and clearly does not belong in the Preserved Tank section, the book ends with some colour profiles and technical drawings, followed by the standard appendices covering the specifications and production numbers of the T-60 tank. 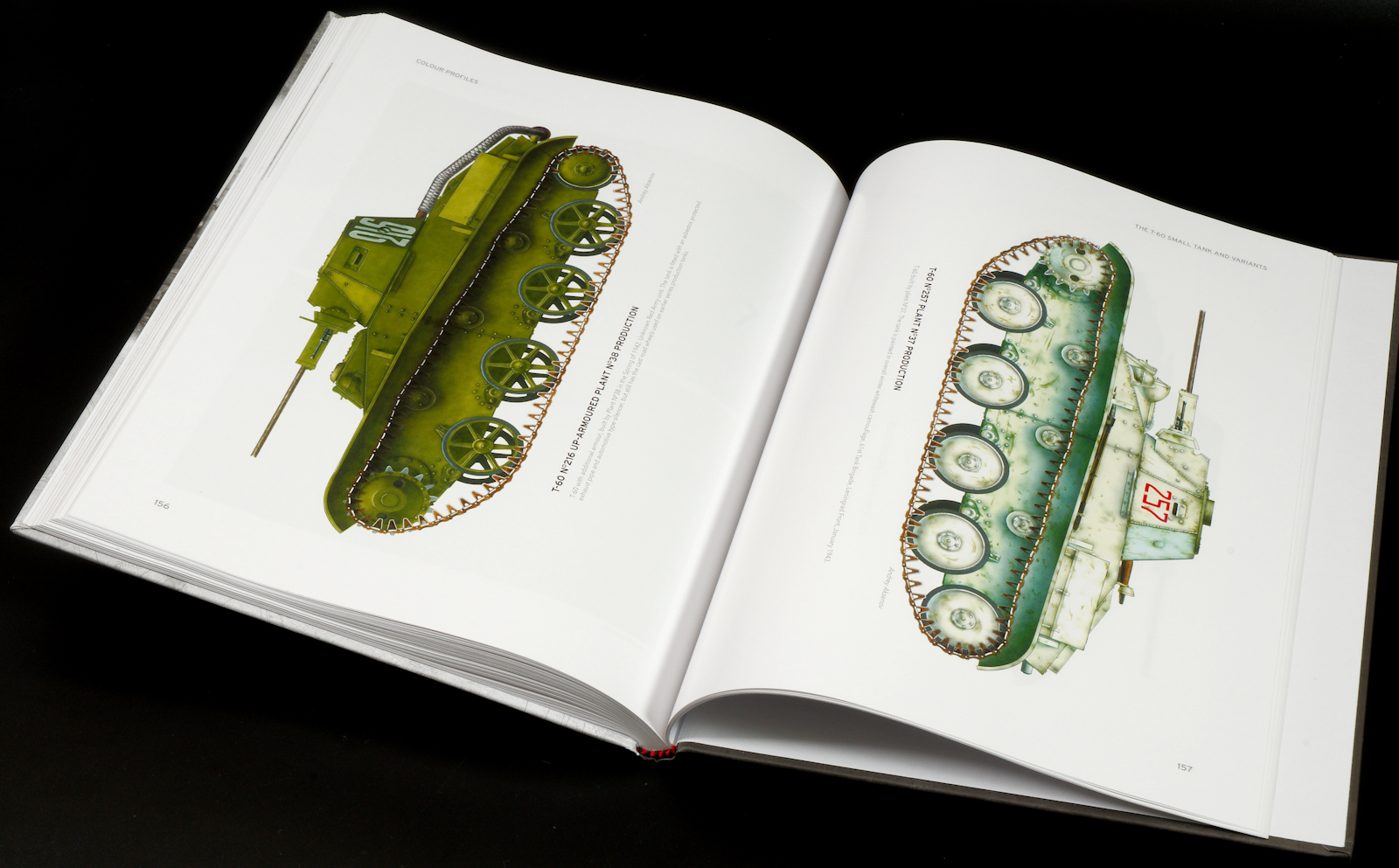 It is not too surprising that almost all wartime Russian tank designs would find themselves overshadowed by arguably the most revolutionary tank design the world has ever seen. However, these tanks are starting to come to light, and this book really does give justice to the T-60 and how it is an unsung hero of The Great Patriotic War, helping to turn the tide of the German invasion through its ability to be produced in large numbers. I’m sure you can tell that I was really impressed by this book and thoroughly recommend it to anyone interested in Russian tanks. Or tanks in general for that matter.

Here’s hoping that this is volume 1, and that there will be more to come.

Thanks to Canfora Publishing for sending this book o us to read and review. "T-60 small tank and variants - Red Machines Vol.1" is available now to order from the Canfora Website