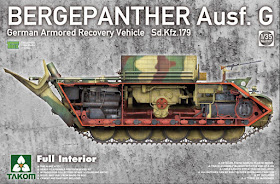 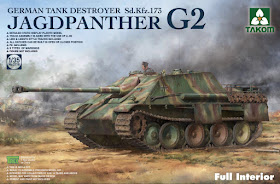 Takom has released cover art and some more details on their forthcoming new Bergepanther Ausf.G & Jagdpanther Ausf.G2 kits in 35th scale, we have the new art and what we know about the kits as well as a few pictures of the real things in our preview... 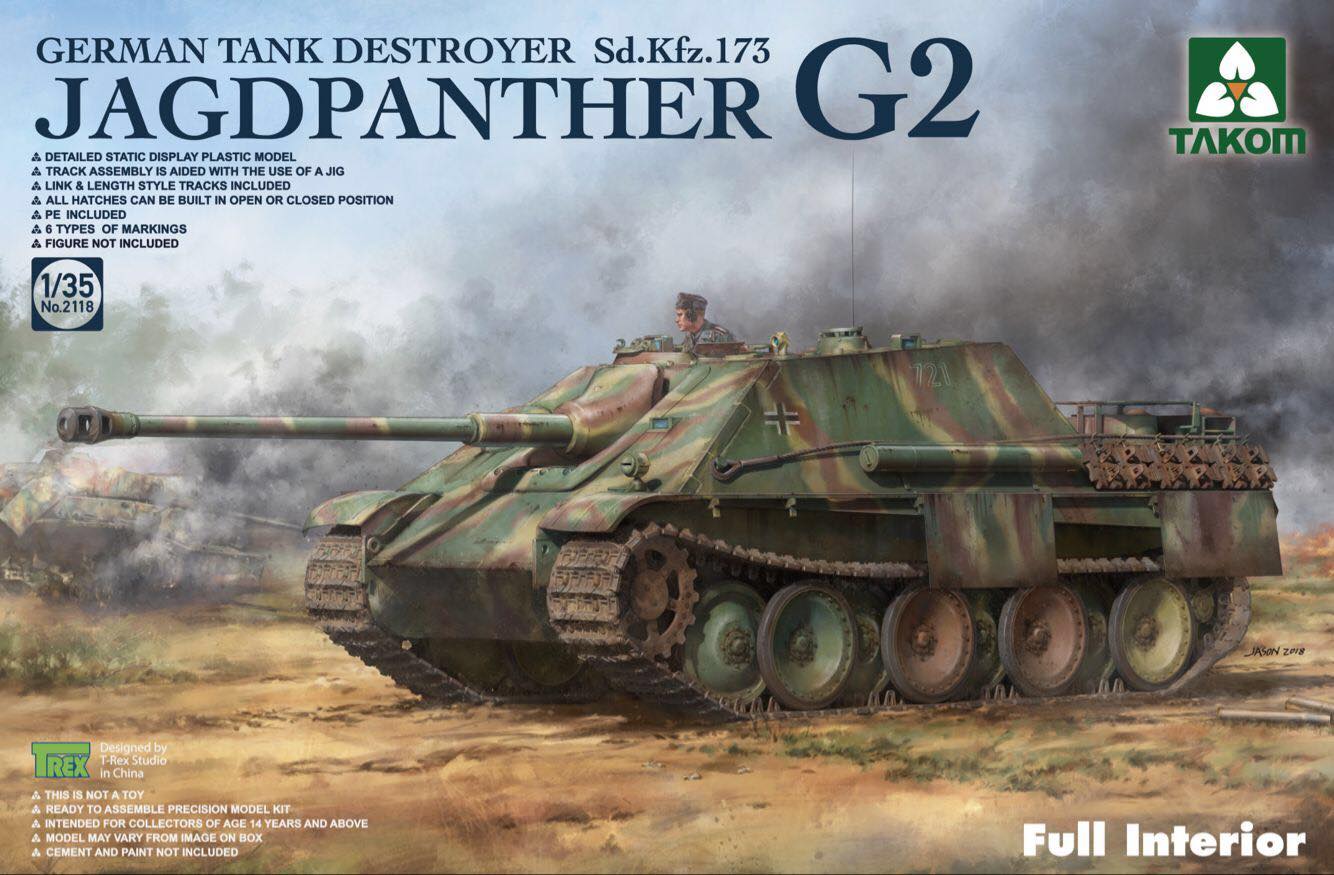 The "Hunting Panther" in real life
The Jagdpanther is one of the most iconic tank destroyers of World War 2. Based on the Panther chassis, the famous tank destroyer was produced from 1943 up until the end of the war in 1945. Mechanically more reliable than the Ferdinand/Elephant and the Köningstiger, armed with the 88 mm (3.5 inch) Pak 43 “Panzerknacker” and with up to 100 mm (3.9 inch) of frontal armour (on the mantlet), it was a formidable opponent for any tank at the time. During the war, over 400 tanks were produced, seeing action on both the Eastern and the Western European fronts. After the war, captured Jagdpanthers were used by the French army, along with Panthers and other German tanks, up until the 1950’s. Overall,the Jagdpanther was a great mix of mobility, firepower and armour. 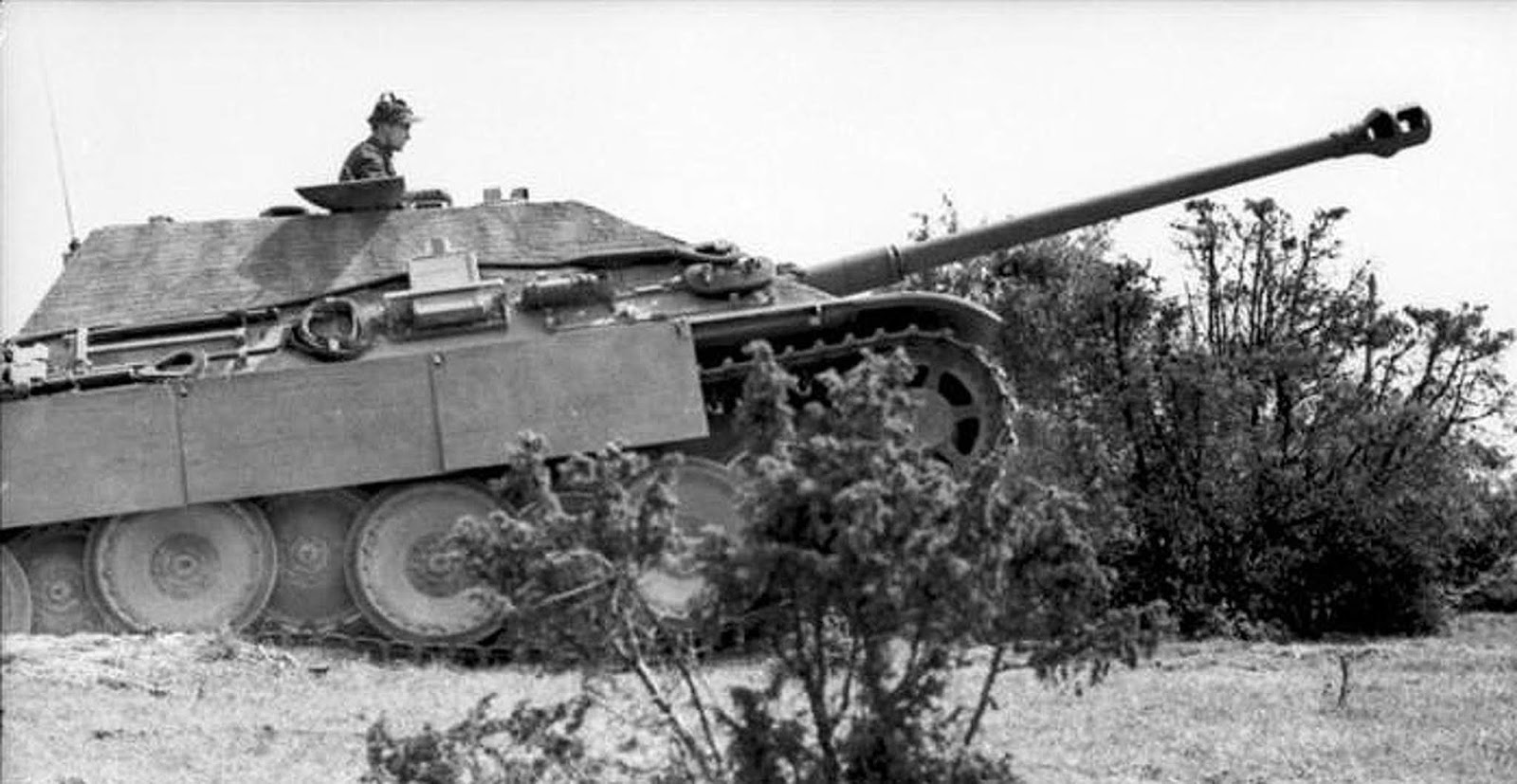 Jagdpanther in action - France
The Jagdpanther mainly saw action one the Western front from its deployment in March 1944, with deployment to the Eastern front only occurring from January 1945 onwards. The first unit to receive the new Jagdpanther was the Schwere Panzerjäger-Abteilung 654. It wasn’t possible to bring the 654th to full strength before being sent to the front in June, 1944. The first action the Jagdpanthers engaged a squadron of Churchill tanks near St. Martin de Bois. In a two-minute action, three Jagdpanthers managed to take out eleven Churchills, before an additional squadron of Churchills rushed in to help. The 6th Guards tank brigade reported the capture of two Jagdpanthers, which had been left behind due to track damage. Nonetheless, this encounter showed the strength of the new tank destroyer and helped cement its reputation as a threat to any tank that encountered it. 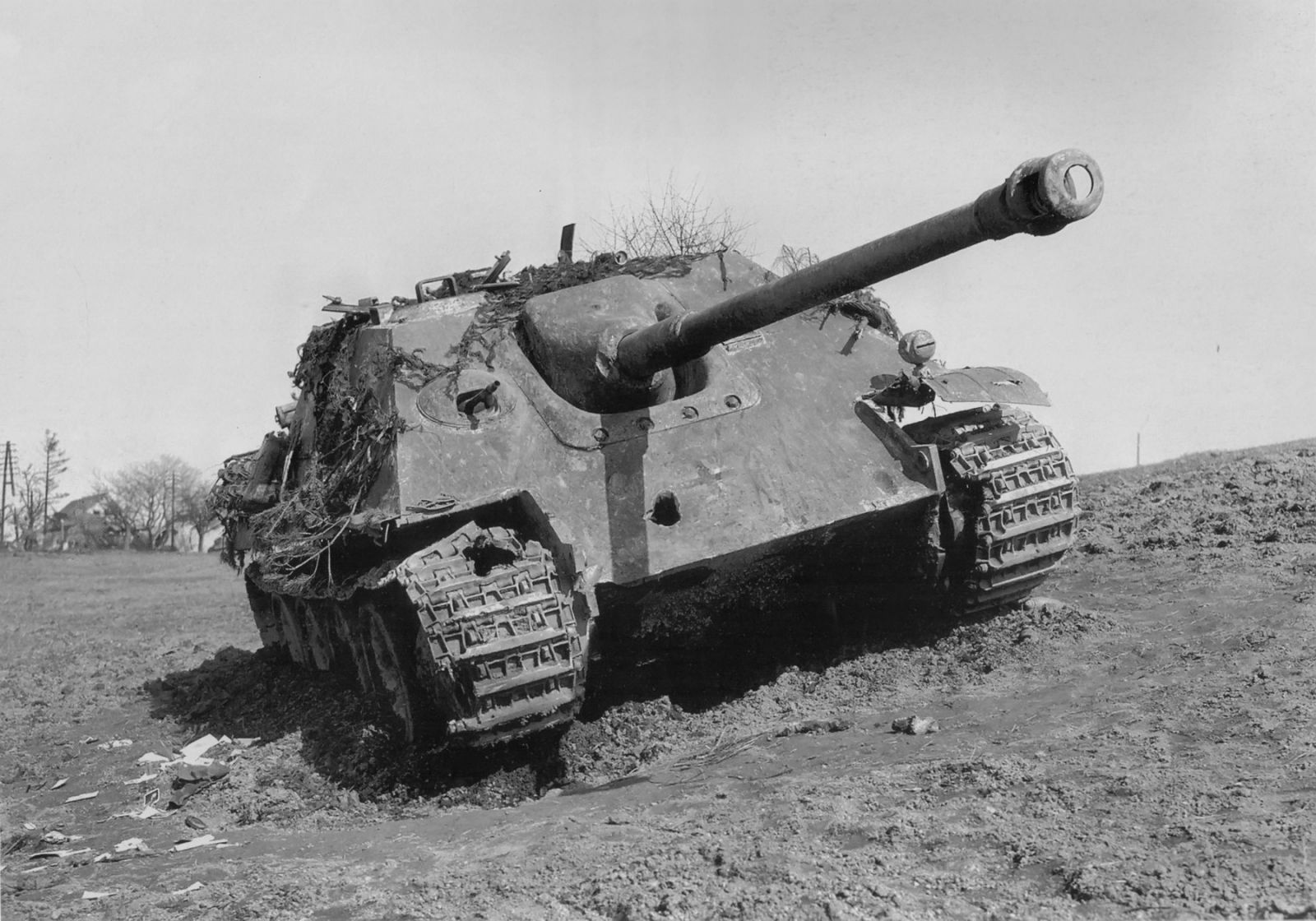 Ardennes Offensive
In preparation for the Ardennes Offensive, the OKH had planned to fully equip five tank hunter battalions with Jagdpanthers. Three of the five units were already at the front and as such weren’t at full combat strength. Due to supply problems, only 27 of the 56 planned Jagdpanthers made it to the battalions before the start of the offensive, with only 17 of them being operational.

Eastern front
Many of the tanks that were sent to the Eastern front weren’t destroyed by Soviet troops, but at the hands of their crew. The main problems that plagued the Panzer divisions were a lack of spare parts, fuel and delays in the production process that prevented more Jagdpanthers from reaching the front. In January 1945, the 563rd s.H. Pz.Jg.Abteilung managed to take out 53 tanks whilst only losing four Jagdpanzer IVs and one Jagdpanther to enemy fire. The bulk of their losses were credited to tanks being blown up lest they fell into enemy hands. For example, a stunning 12 Jagdpanthers and 17 Jagdpanzer IVs were destroyed by their crews in the 563rd alone. The rapidly deteriorating situation meant that many of the Jagdpanther crews sent to the front in 1945 had received little or no training, which reduced the already impaired effectiveness of the tank destroyer battalions. 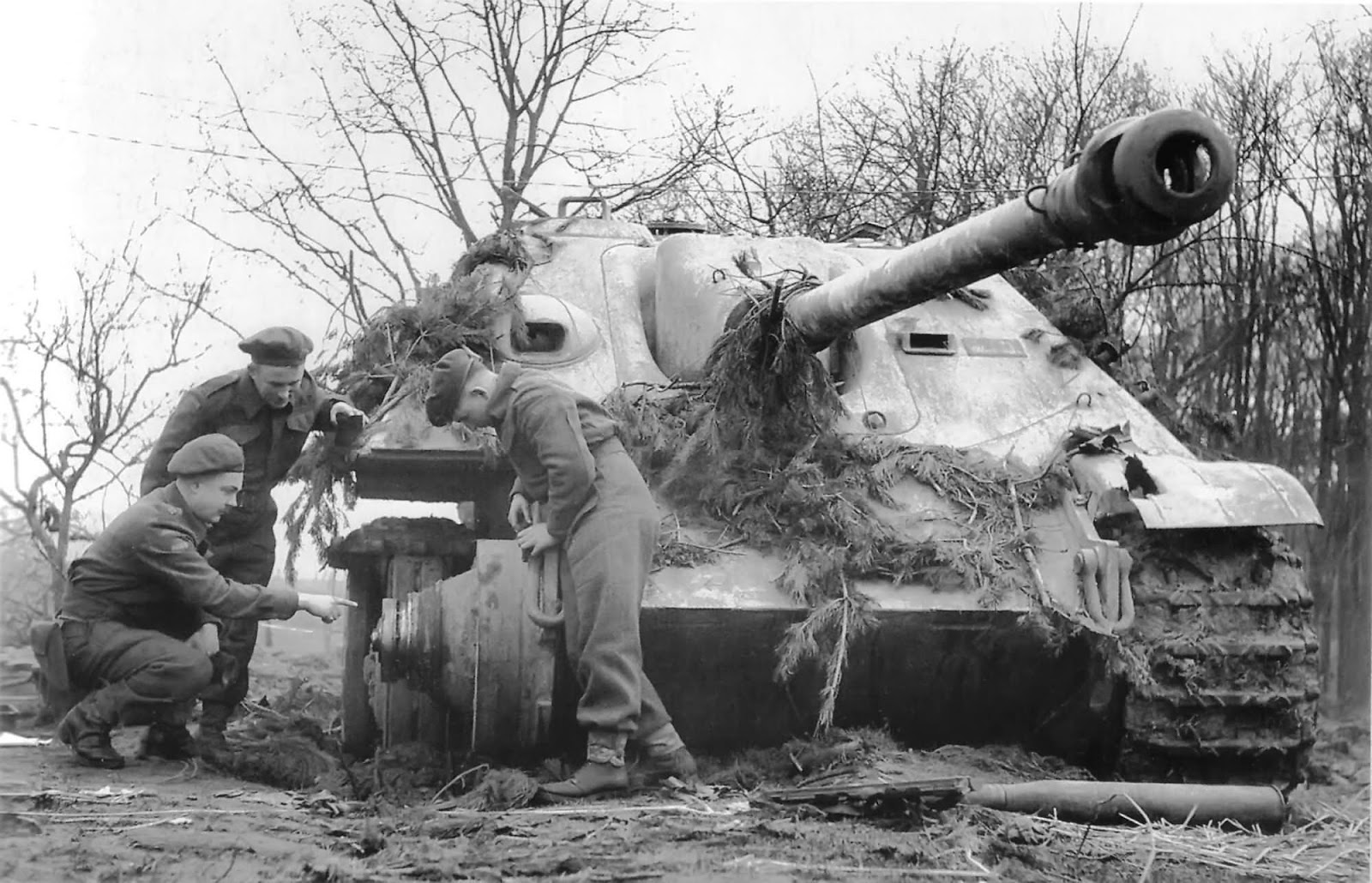 The G2 Jagdpanther used a Panther Ausf. G engine deck, a larger gun mantlet bolted externally (to cut down on production time?) and a two piece KwK.43/4 L/71 gun. Some later G1 models may have possessed G2 features such as the larger G2 mantlet because changes to the design were implemented gradually and lack of spares turned many Jagdpanthers into 'hybrids'. Zimmerit was applied to G1's up to September 1944, when it was withdrawn for fear of fire risk and to speed up production time. Early Jagdpanthers' had two vision openings for the driver, whereas late versions had only one. The main gun originally had a monobloc gun barrel, but from May 1944 on it was gradually replaced by a two-part barrel which was more economical as barrel wear was not even. Today, only 10 of the Jagdpanthers are left, spread across various museums worldwide. 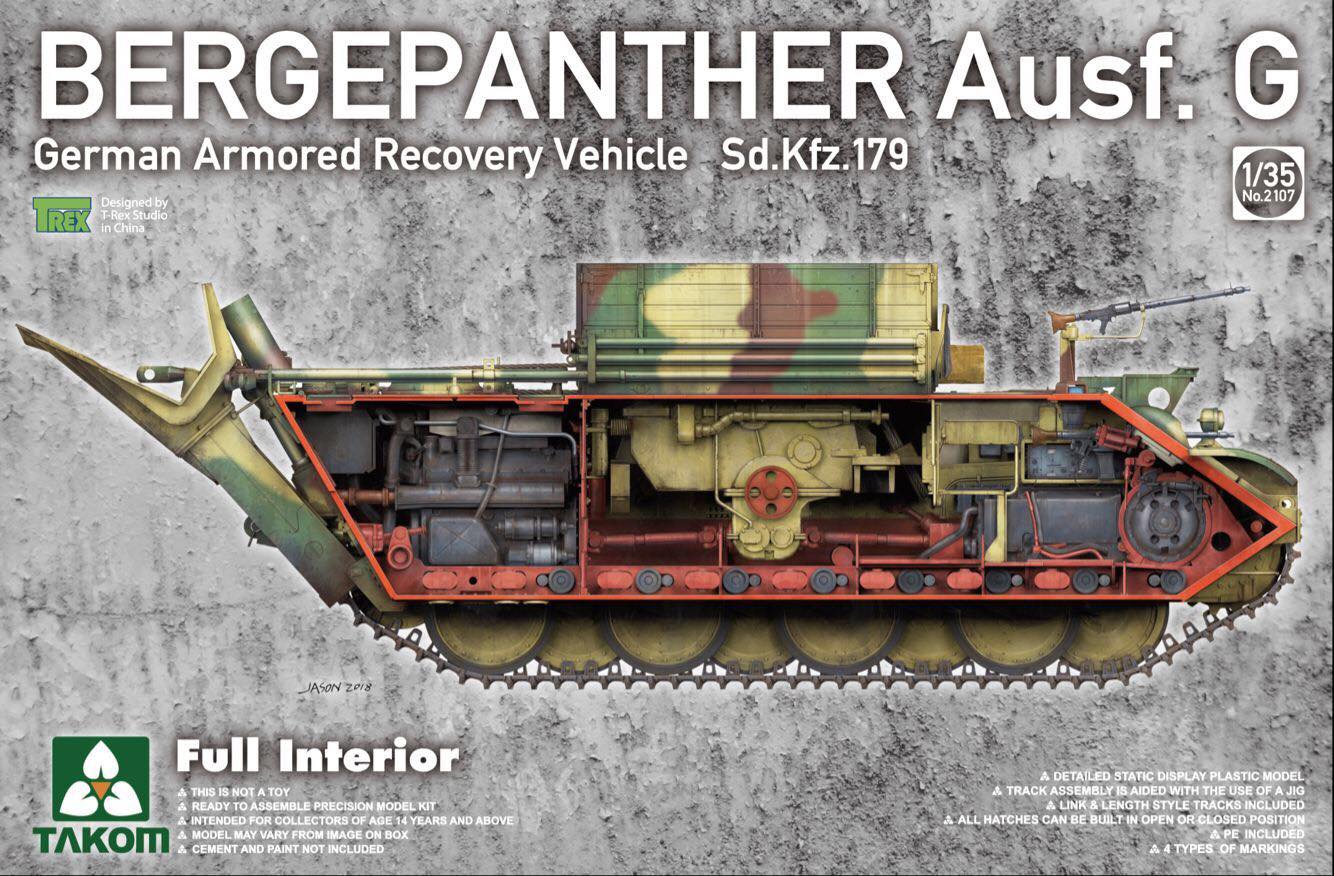 The SdKfz 179 Bergepanther was an armoured recovery vehicle that was used by Germany during World War II. It was based on the chassis of the Panzer V Panther with the first production model was the Ausf. A version. The Bergepanzer Sd.Kfz. 179 or Berge-Panzerkampfwagen Sd.Kfz. 179 was often abbreviated to Pz.Berge.Wg Panther I Sd.Kfz. 179.

The Bergepanther first began its development in 1942 because of the need for a heavy duty tank recovery vehicle that came about with the introduction of German heavy armour such as the Panther medium tank or Tiger I heavy tanks. These generally required up to three SdKfz 9 Famo half-tracks to recover them compared to the single half-track needed to tow a Panzer III or Panzer IV. Tigers at the time were also valued highly, a little more so than the Panthers considering the Tiger's smaller production numbers. This made the Panther the preferred base for the new heavy armoured recovery vehicle. 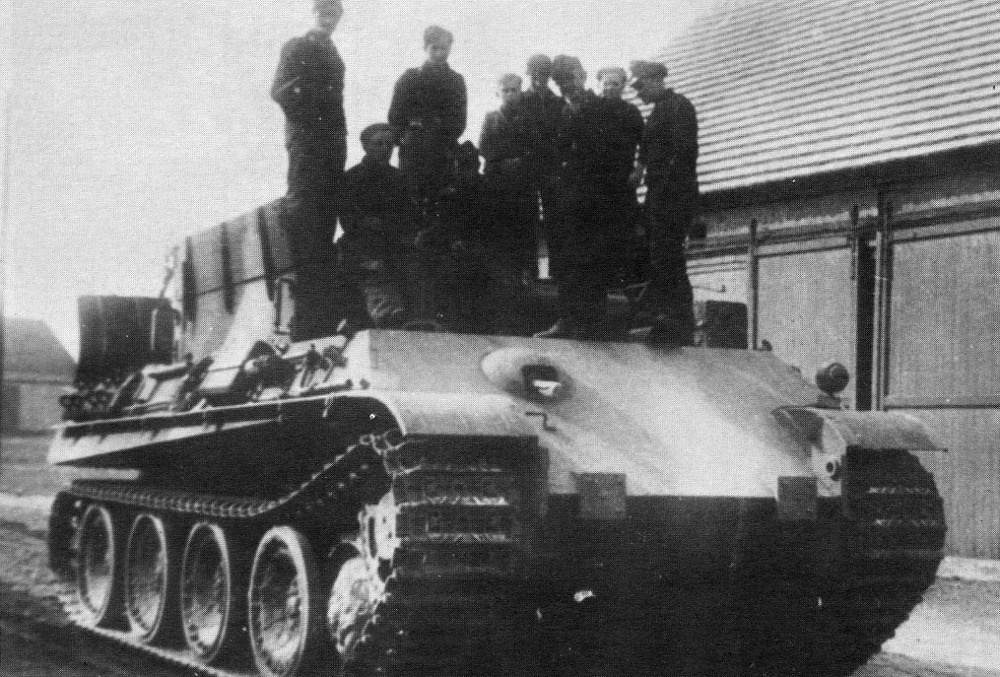 These vehicles produced by MAN were subsequently shipped off to serve during the Battle of Kursk and after some success in the role were then used in various other battles until the end of the war. Around two to four Bergepanthers were allocated to each tank unit.

The Bergepanther had a crew of five men and a Maybach HL230 P30 engine, which, just like the standard Panther medium tank, propelled the vehicle to speeds of up to 46 km/h. 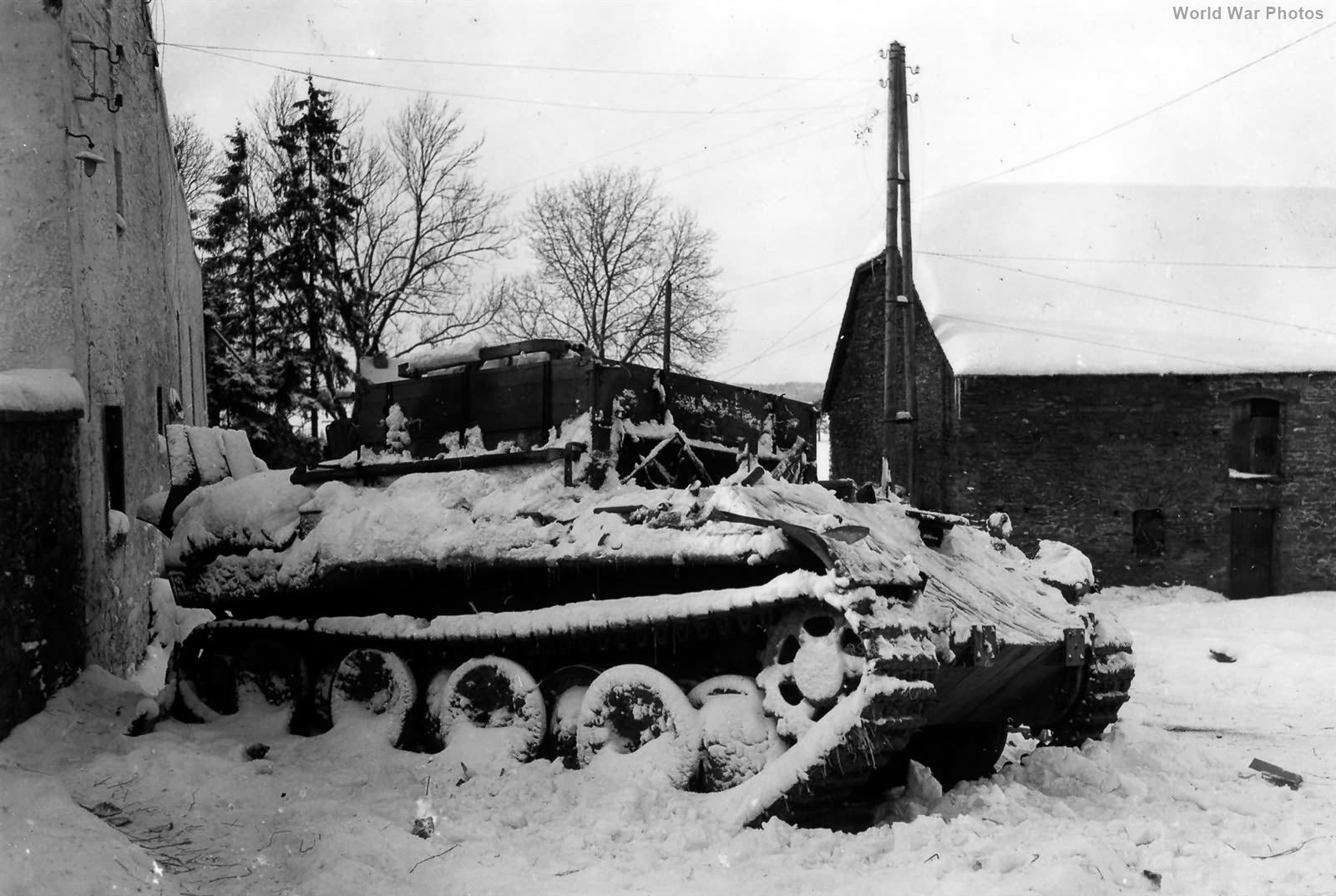 The main and obvious difference between the Bergepanther and the original Panther was that the Bergepanther had a 40,000 kg winch and cable system that replaced the turret. For defensive armament, some Bergepanthers mounted a 20 mm KwK 38 cannon and an additional MG 42 machine gun.  The very first production models, however, did not receive the KwK 38. Furthermore, these first models only had wooden coverings over the hatch that opened to let engineers take out tools from inside the vehicle.

The Bergepanther also had a 7 speed forward, 1-speed reverse transmission system with a maximum range of about 200 kilometres. Another commonly added feature was a rear-mounted spade which acted as a counterbalance when recovering a vehicle. 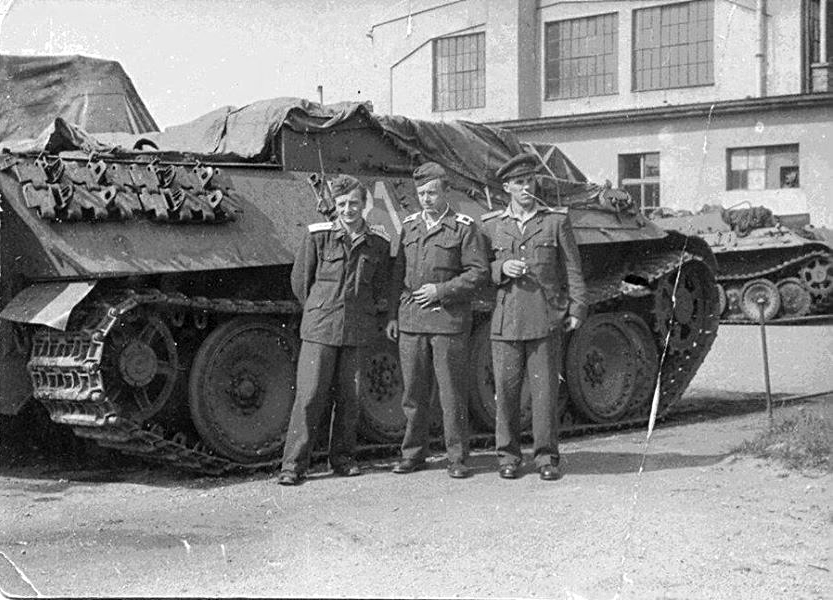 Variants
It is quite difficult to describe the variants of the Bergepanther series because most models had several modifications from each other and numerous other sub-modifications based on factory requirements or field needs. The main variants, however, were the first production model, the Ausf. A using the Panther Ausf. A hull as a base. The second most numerous were the Ausf. G. 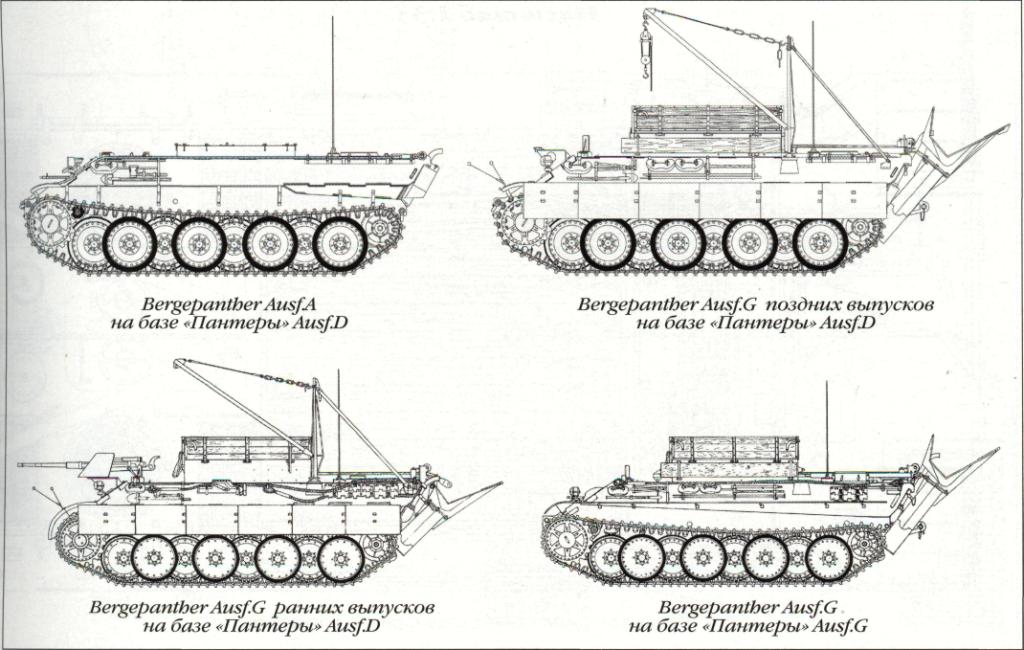 The Bergepanther G was based on the Panther Ausf. G hull. In between, models, as mentioned above, had varying equipment loads such as the implementation of a counterbalance spade or the defensive 20mm KwK 38. 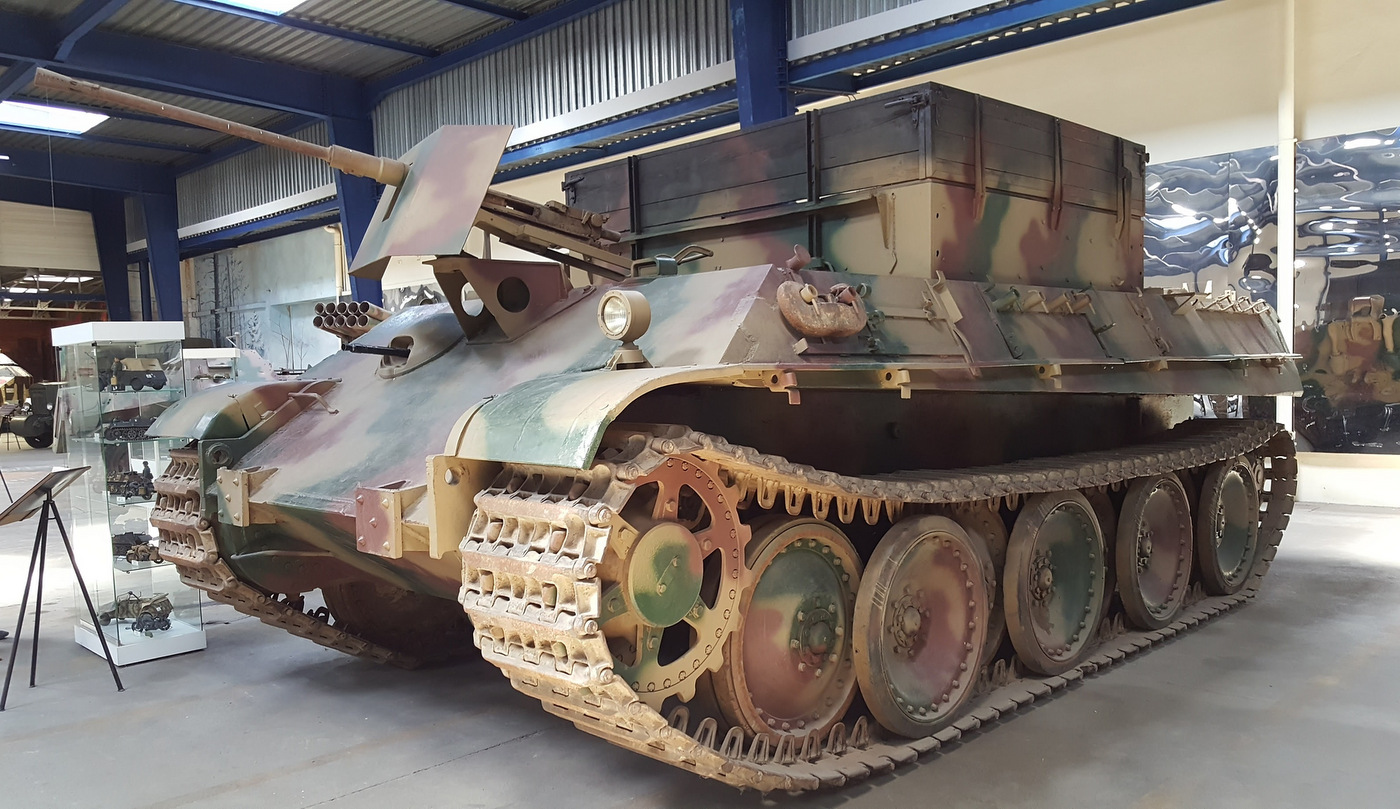 I know of two Bergepanthers that can be readily seen in museums. One in the Musee des Blindes in Saumur in France, and another in the Panzer Museum in Munster, Germany. Both of these show different customizations, so likewise you could make your own Bergepanther into a version of whatever you like within reason. 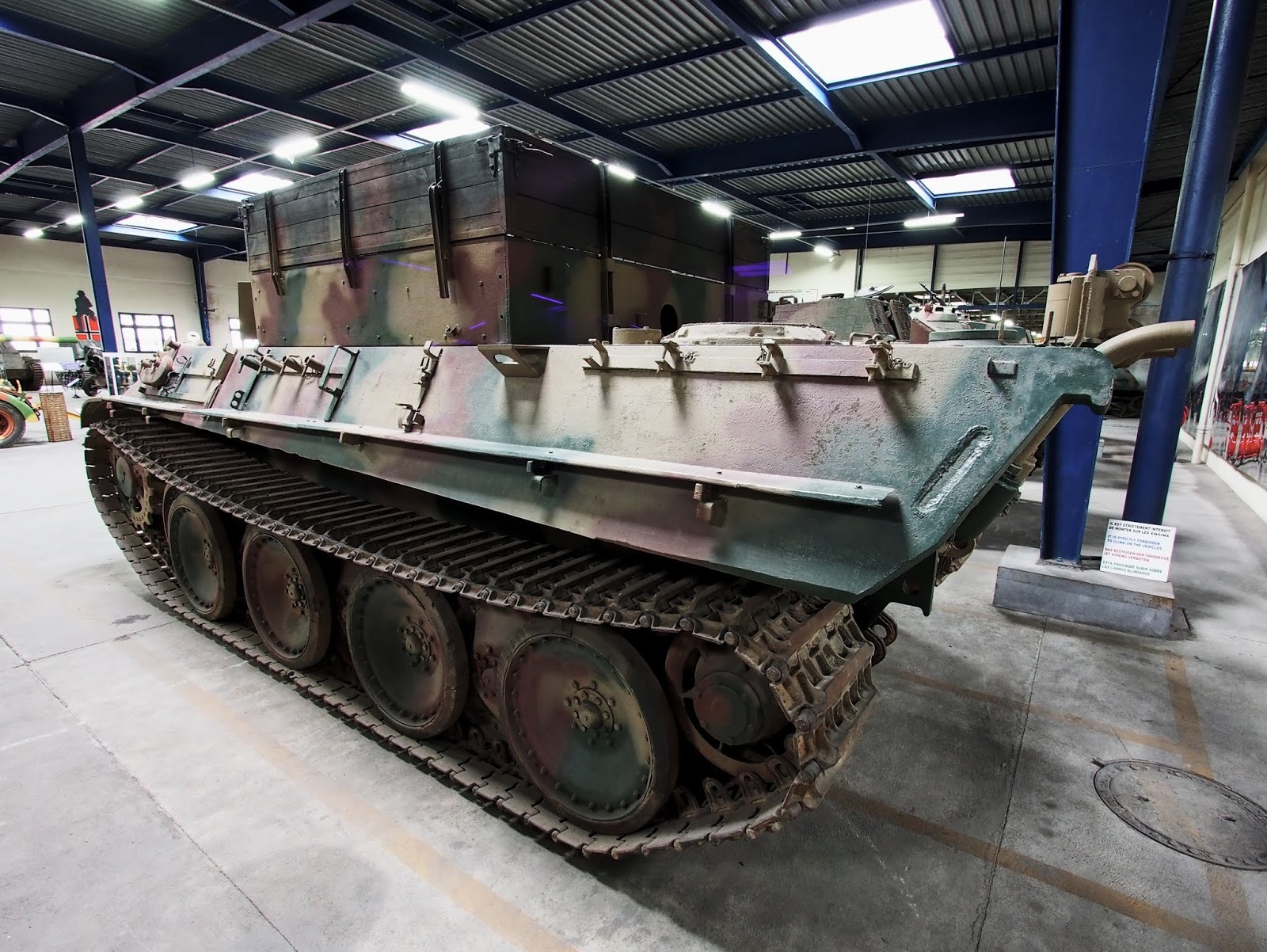 In October 1944, DEMAG switched to the production of an improved version of the Bergepanter, Ausf.G (chassis numbers from 175664). Different sources cite conflicting data regarding this option: for one, the Bergepanters Ausf.G were based on the Panther chassis of the same modification, for others, despite this coincidence, the modifications of the BREM and the base tank were not related, but the Panther chassis Ausf.G began to be used by BREM independently, since October 1944. Especially for the “Bergepanter” of this modification were created: a modified body with equipment layouts, a transmission and brake ventilation system, exhaust pipes, fuel tanks, air filters, electrical equipment, installation of a radio station and external fixtures for equipment. The rest of the chassis components were interchangeable with the base tank, and the repair and evacuation equipment did not change compared with Ausf.A, except for transferring the crane brackets from the side plates to the roof of the engine compartment, however, the 20-mm gun provided by the project was eliminated Ausf.A. 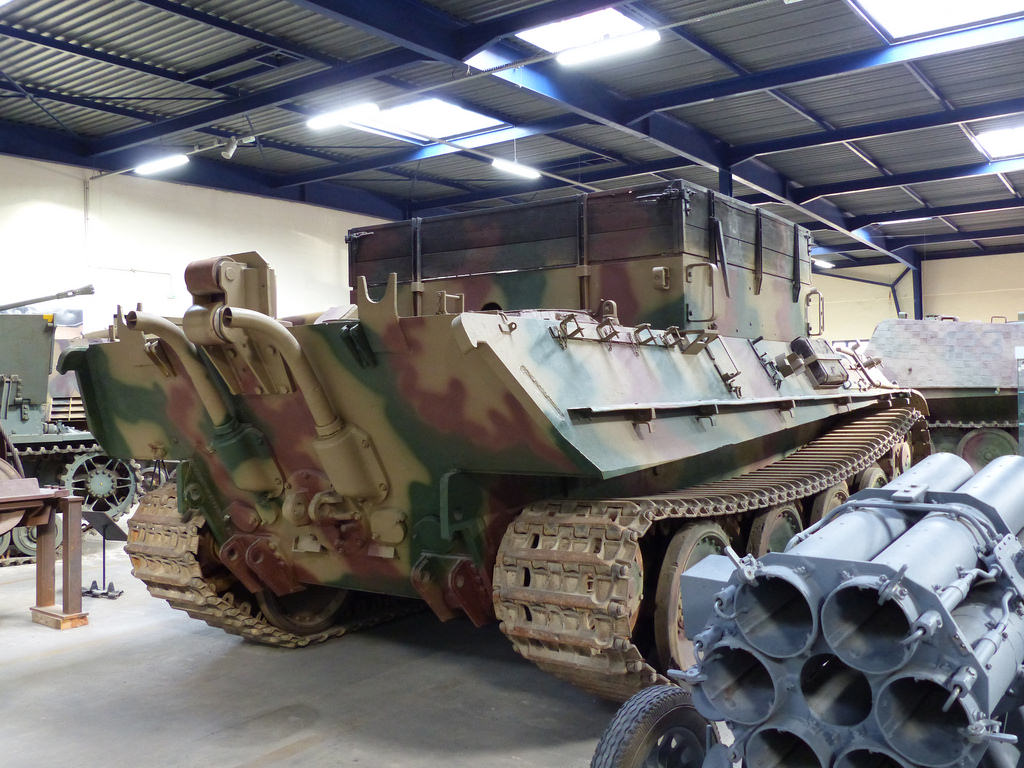 The Bergepaner Ausf.G replaced the Ausf.A version on the assembly lines, according to some data, in September, according to others - in October or November 1944. According to different sources, the production of Ausf.G on DEMAG lasted until February 1945 with the release of 107 cars of this modification or until April, but with the release of only 45 BREM. General data on the release of "Bergepanter" range from 290 (not counting the refitted) to 297 BREM or 347 new and refitted machines. During serial production the design of the Bergepanter, both modifications common to the Panther chassis and a number of specific BREMs were made: transfer of anti-aircraft machine gun installations to periscope covers, insertion of anchorage for crane and wooden bars, brackets for rigid towing coupling at the stern, swing frame for the awning above the control section, alteration of the central aft towing bracket as well as various changes in the equipment layouts 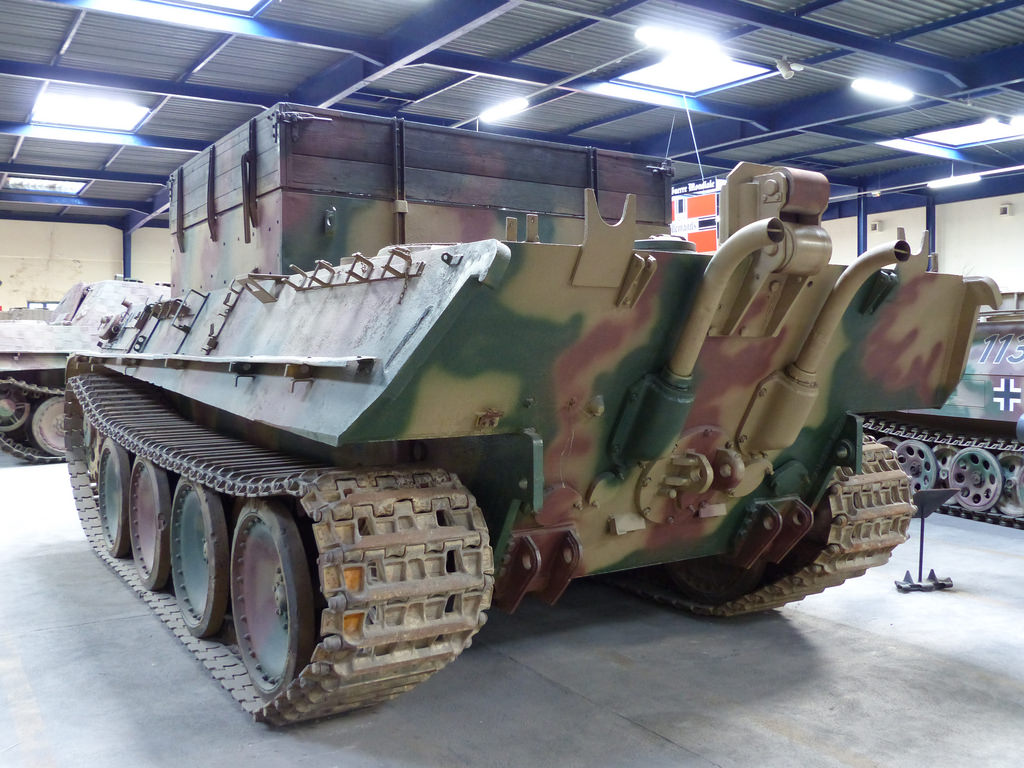 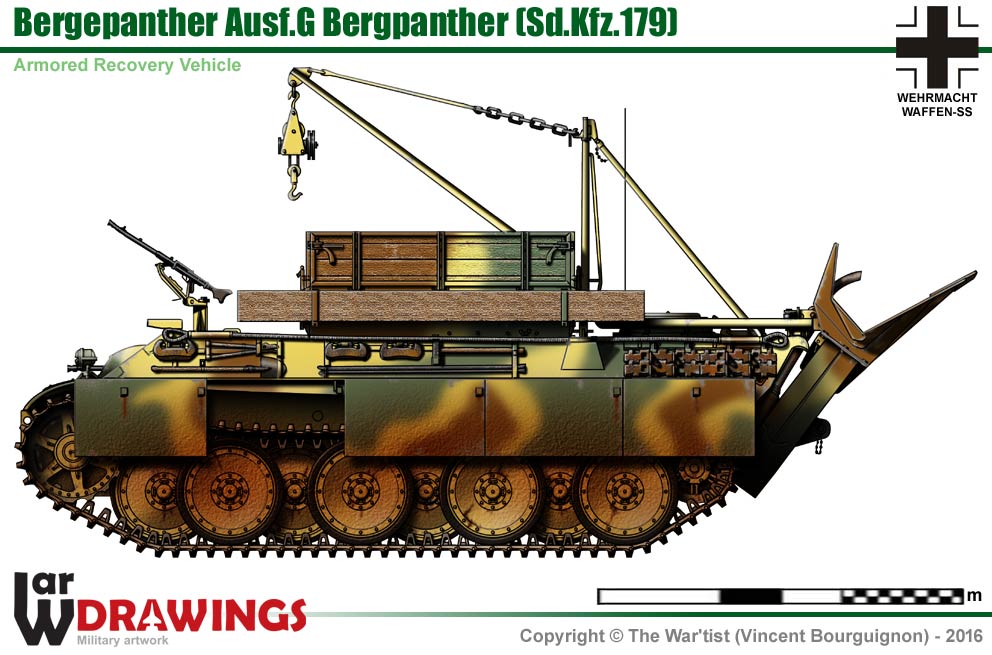 The facts about the kit from Takom we know so far:
The kit is an adaption of the new-tooled kit of the Bergepanther "G" coming soon.
Designed by the Liang Sun from T-Rex Studio
Forward crew compartment included inside and out
Due in November 2018

Kit features the Mg34 defensive weapon on the Bergepanther. 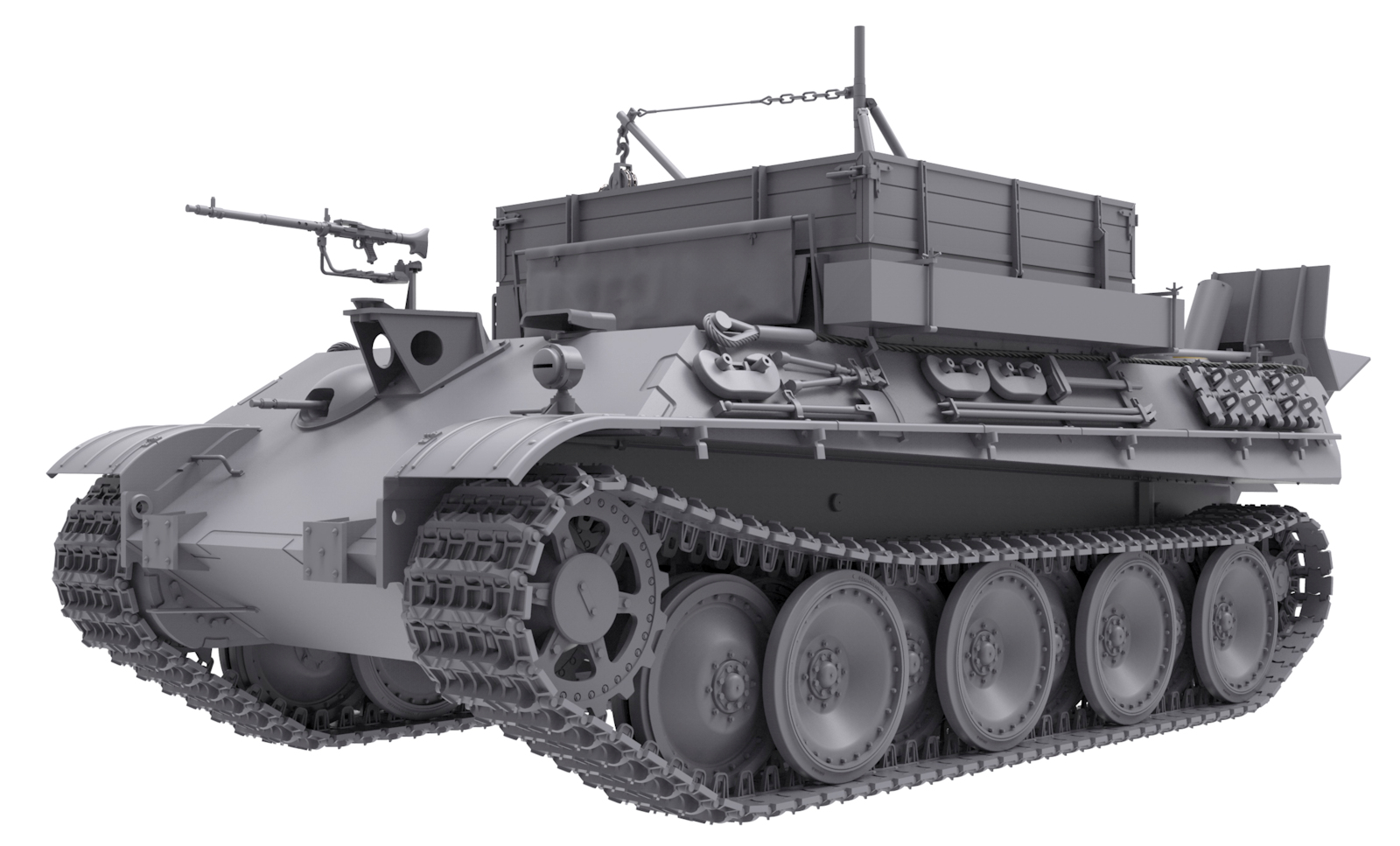 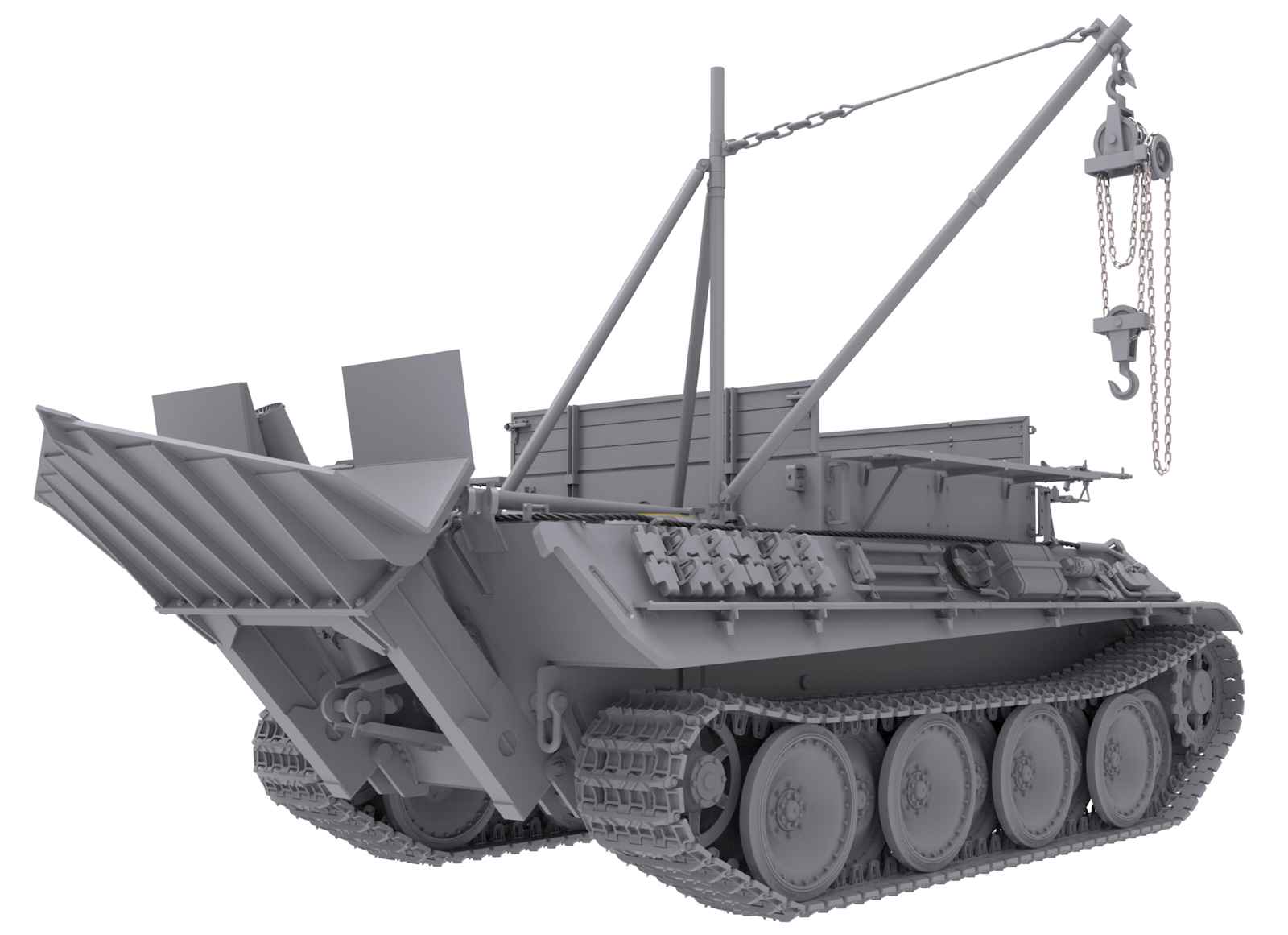 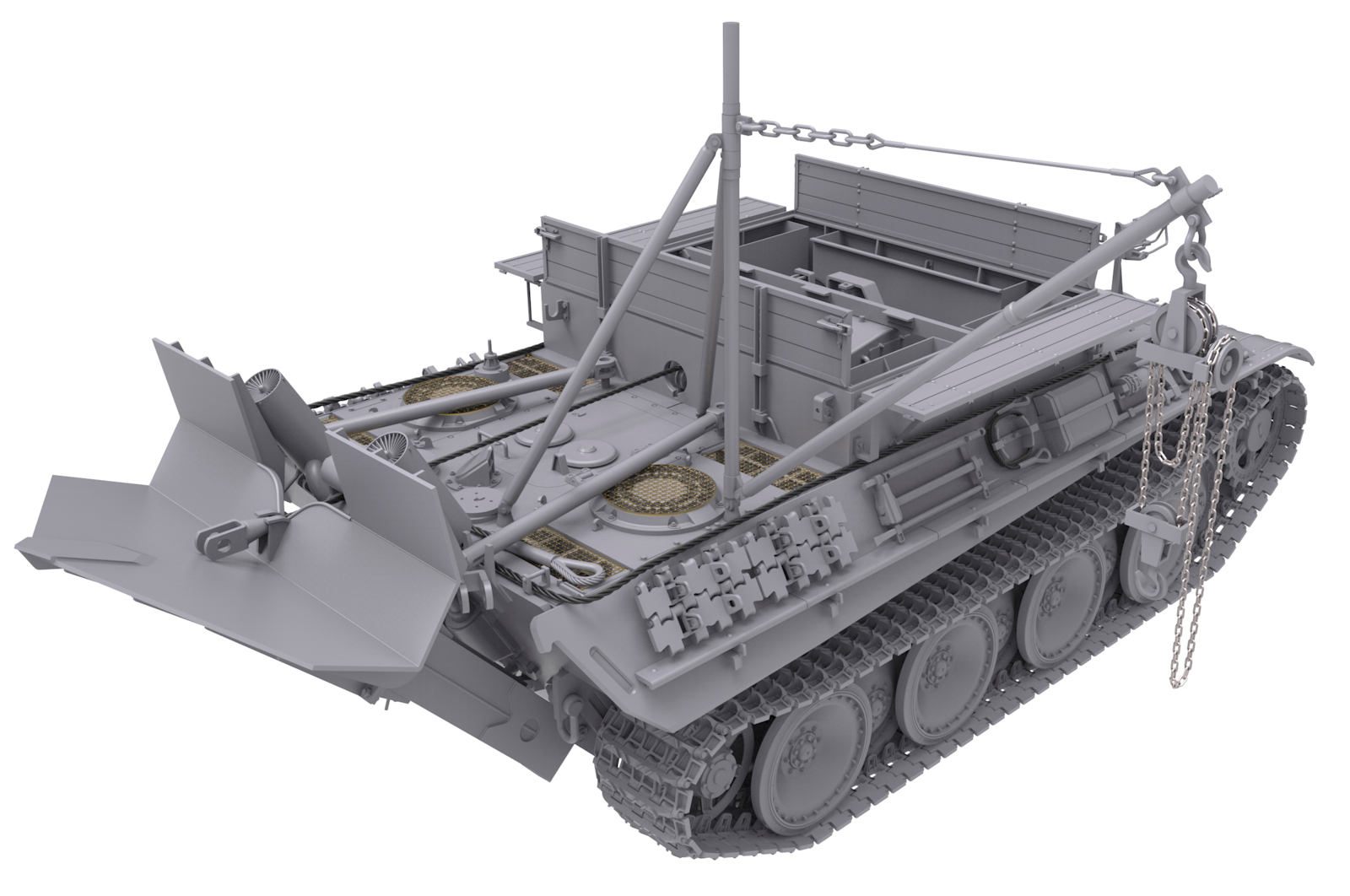 You can see the whole "shebang" inside the hull with a great deal of detail. No resin needed here guys! 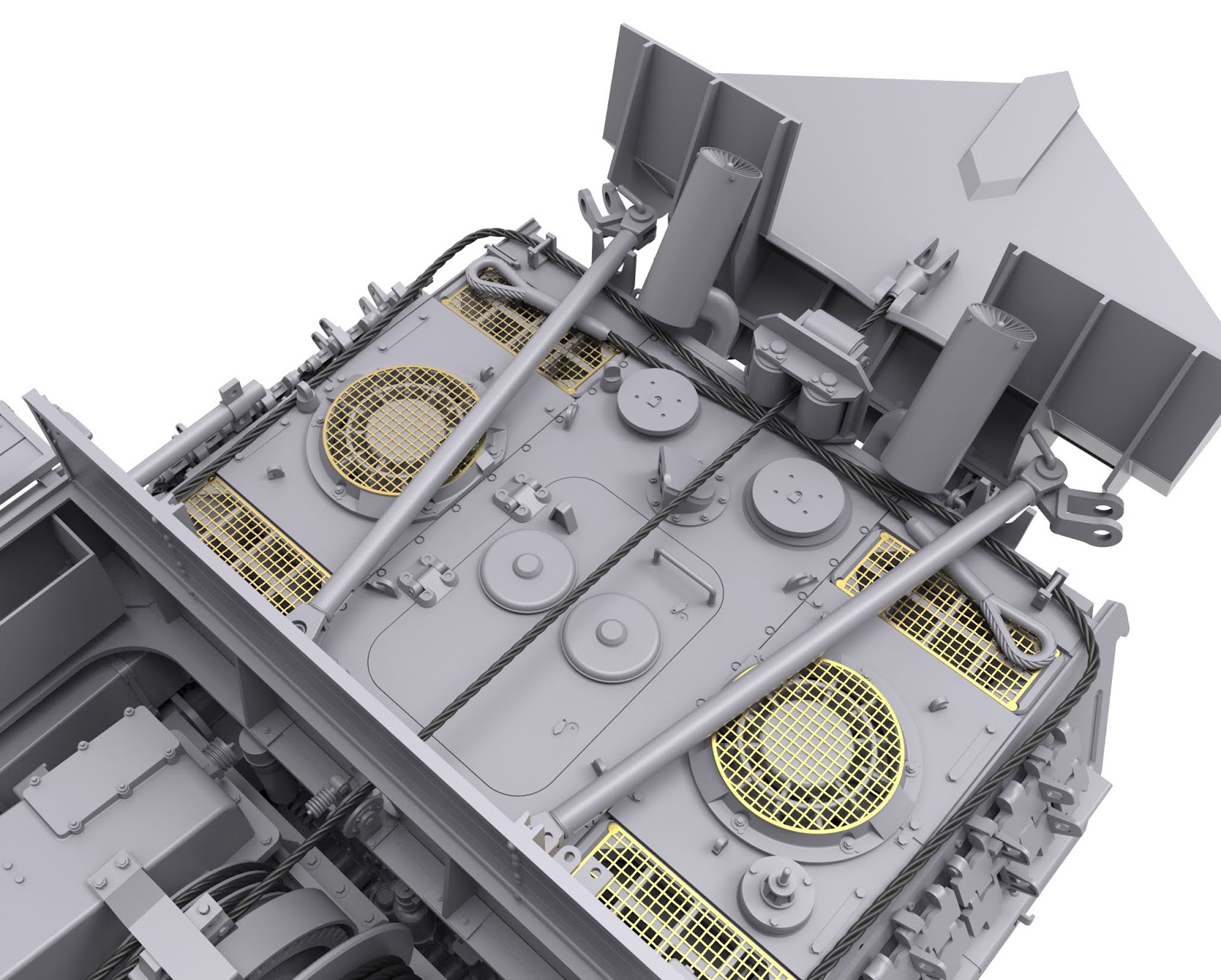 These two new kits will be available in December from Takom's Website or their distributors worldwide.